Review of ‘Behind the Mask: the Life of Vita Sackville-West’ by Matthew Dennison

This review, of which the following is a pre-edited version, appeared in The Spectator here, on November 22nd 2014. 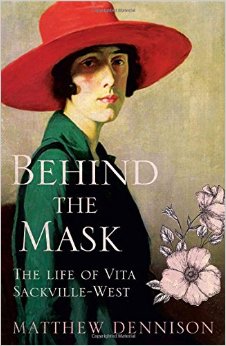 Visitors to the National Trust’s Sissinghurst – the decayed Elizabethan castle transformed by Vita Sackville-West in the early nineteen-thirties – are regaled by picturesque extracts from Vita’s landscape poems, and moving professions of love to and from her husband Harold Nicolson. Dennison’s title, Behind the Mask, indicates his ambition to get beyond such projections to something more real. But the metaphor is unfortunate. There was no single image that Vita adopted or which others imposed on her – nor a single real self which has been concealed until now.

Dennison knows this. He interprets Vita in terms of a split between the reserve inherited from her English father, Lord Sackville, and the passion inherited from her mother, the illegitimate daughter of a Spanish dancer and another Sackville (Vita’s father’s uncle). The autobiographical Ruth of Vita’s first published novel, Heritage, is ‘cursed with a dual nature, the one coarse and unbridled, the other delicate, conventional, practical, motherly, refined.’ Vita herself acknowledged that ‘My whole curse has been a duality with which I was too weak and too self-indulgent to struggle’.

But Dennison also finds two other aspects of Vita’s family determinative. One is the selfishness, prodigality, and snobbery of her parvenu mother Victoria, who presents a model of painfully broken marriage to her undermothered daughter. The second is Knole, the Elizabethan mansion in which Vita grew up and of which she increasingly thought as her lover. Her inability to inherit it because of her sex is posited as the cause of a lifelong obsession, and as encouraging her self-projection as the man who, had she been, would have inherited it.

Vita’s copious writings – novels, novellas, poems, biographies and travel writing – have now been largely forgotten, and were falling out of favour even in her lifetime. Dennison interprets them as autobiographical, and therefore sees them as fair game to chop up and scatter through his biography in corroboration of his points, always explaining ‘who’ (in life) is ‘who’ (in fiction). Vita is usually a male character. Because his interests are as much psychoanalytic as narrative, his structure is not only chronological but thematic, and the chapters are based on titles of her works. This produces a degree of repetition. Nor are his psychological inferences invariably convincing. The Spanish/English binary has limited explanatory power. He observes that, since Vita understood love and suffering to be inextricable, ‘the surprise is that she herself remained highly sensitive and easily wounded’. One wonders why.

Yet this carefully-researched book is intelligently and elegantly written, frequently using what Vita’s sometime lover Virginia Woolf, in A Room of One’s Own, calls ‘a man’s sentence’ – balanced, oratical, and confident. He makes illuminating references not just to Vita’s writing but to others’; Woolf’s Orlando (a tribute to Vita which she gleefully accepted), Vanity Fair (in which Victoria significantly liked Becky Sharpe), and Anna Karenina (which Vita reread during a particularly fraught elopement with her lover Violet Keppel).

Still, as I read, I repeatedly asked myself ‘why?’ or ‘why now?’ ‘What is our interest in Vita today?’ Some will still relish her highly sensuous gardening writing (‘we hold a single rose close to our eyes and absorb it in an intimate way into our private heart’). She was importantly heterodox as a woman, and, like Dennison, was moved to write biographies of extraordinary women of earlier ages (in Vita’s case, Joan of Arc). Yet, as was true of many aristocrats, she had little interest in the women’s movement. Nor did she identify as a ‘lesbian’ (a term little used then) or ‘a congenital invert’ (the sexologist Havelock Ellis’s term adopted by her more decidedly gay contemporary Radclyffe Hall). Unlike Vita, Hall dressed consistently as a man, and unlike her, wrote an explicitly lesbian novel.

Perhaps Vita speaks most loudly to the present in her open marriage. The realm and power of marriage are much diminished since Vita’s time, and unconventional marriages such as hers, the Woolfs’, and the Bells’ helped to bring this about. Yet the biography makes clear how emotionally expensive open marriage can be. During the most fraught of Vita and Violet’s elopements to France, Vita ended up travelling with Violet’s pursuant husband Denys. After Denys returned home in despair, Violet’s mother found a two-seater aeroplane and sent him back, accompanied at Victoria’s insistence by Harold. This foursome met and remet in different configurations over three, torrid years.

Despite this, Vita comes across as of limited interests and interest. Her disconnection from politics, despite living through two world wars, and her husband becoming an MP, is striking. Her extensive and exotic travels, connected with Harold’s diplomatic career, and her travel writings, are briefly described. Of her and anyone else’s views on religion there is not a mention.

Vita’s similarities with her contemporary, the artistic hostess and patroness Lady Ottoline Morrell, are striking. Both spent lonely, aristocratic childhoods in a vast house which they would never inherit, eventually acquiring country seats of their own. They married mild-tempered men of a slightly lower class, who entered politics, and tolerated their many affairs. They presented their unusually beautiful, tall selves with theatrical aplomb, were painted often, and designed interiors and gardens with pleasure and success. They had mounting money problems, and died painfully of cancer.

But the differences work overwhelmingly in Ottoline’s favour. Whereas Vita yearned for Knole all her life, Ottoline accepted the loss of not only Welbeck, but her adult homes at Garsington and in Bedford Square, with good grace. Virginia Woolf felt the difference, and came to admire Ottoline – as she told Vita – particularly in later life. Ottoline cared about the state of the country, her husband’s liberal politics, her religion, and the wellbeing of the arts and artists. She was inveterately sociable. Vita of the ivory tower did less with more wealth. In her relationships, unlike Ottoline, she hurt more than she was hurt. Yet her artistic creations, of words and plants, remain. What she bequeaths us speaks of an age which is past, but should not be forgotten. We are its children.