Posted on February 28, 2016 by Catherine Posted in Events

CND supported by the Stop the War Coalition 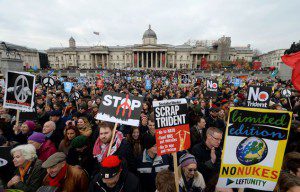 The Guardian called it the largest anti-nuclear demonstration for a generation, after the 1983 demo against the missiles on Greenham Common.

And it did feel big. A rather diffuse gathering at Marble Arch came to feel reassuringly solid by the time it was passing down the alimentary canal of Park Lane and Picadilly into the stomach of Trafalgar Square. It’s hard to gauge these things – and I at no point got a vantage point from which I could see the crowd – but I felt nicely protected from the wind, and there was a depth to the sound of thousands of voices.

The demographic was a bit older than for the Stop the War-led demonstrations, no doubt because this time CND was the lead organiser, and could bring out supporters of decades’ standing. The gender split was equal, as is the way with all demonstrations that I attend (except that there were perhaps slightly more women at the weekly vigil outside Parliament for Guantanamo detainee Shaker Aamer – and angry young men have a high profile on the pro-Palestine demonstrations). What was striking was how white this demo was. I have never seen so white a crowd filling Trafalgar Square. Nuclear armament is not an issue, it would seem, that brings out non-white Londoners.

The emphasis of the placards and the speeches was heavily on what alternatively might be done with the £167 billion that replacing Trident is now estimated to cost – especially for the National Health Service. It is, of course, striking that the budgetary constraints, which allegedly dictate that the money simply is not there for X or Y social purpose, apparently vanish when it comes to such a project.

Trade Union leaders explicitly denied that the trades unions (as some media outlets have suggested) support the renewal of Trident for the sake of arms-industry jobs. As a man from UNISON put it: ‘I support civil servants who work in job centres. Does that mean that I want unemployment, because I want those workers to keep their jobs?’. Noone, though, put the moral point quite so crisply as did Anne Widdecombe when arguing against fox hunting in the House of Commons (and the argument that it should be retained to protect employees of kennels): ‘if something is wrong, it is wrong no matter how many jobs are lost because of abolishing it’. These speakers were careful to state that they called for the redeployment of arms-industry engineers to sectors such as renewable energy. They observed that the government professes far more concern about the jobs of arms-sector employees than for those of any other industry.

There was a striking sequence of female speakers: Vanessa Redgrave, Nicola Sturgeon for the SNP, Leanne Wood for Plaid Cymru, Caroline Lucas for the Greens, Lyndsey Germain for Stop the War. Go figure, I thought.

There were the usual anti-capitalist banners, chants, leaflets and newspapers. People in favour of capitalism – of whom I hope that there were many on the march – needed simply to ignore these; but I always think it best to avoid too obviously grinding an axe which is not the title axe of a demonstration, in the interests of harmonious coalition. For one thing, the UK arms industry, due to its heavy government subsidy, precisely does not operate in a capitalist way.

I was handed leaflets about the Save Shaker Aamer Campaign (now calling for a judge-led enquiry), the London Guantánamo Campaign (calling for closure of the prison), The Socialist Party (calling for socialism), reinvestigate911.org (calling for the revelation of various conspiracies determining the lead-up to and fall-out from the 11th September 2000 attacks in the US), and Socialist Labour (calling for the Labour Party to become anti-capitalist). Slogans on posters included ‘Books not Bombs’, ‘Limited Edition’ (over a picture of the Earth), a call for a ‘Referendum on Trident’, the chirpy assertion ‘Hell No We Won’t Glow’, and, enigmatically, ‘Football Against Apartheid’.

After four hours I had had enough; the February winds were the enemy of activism. I had stuck out for Jeremy Corbyn – on his way from Sheffield, where he had been that morning. And I was reminded of another freezing day, a few years before his election as Labour leader, when he was addressing the Stop the War demonstration on behalf of whichever country it was that the UK was thinking of invading next (I think Syria). His was the final speech of the day. As he wound up, he congratulated the crowd, and told us that it was now time for us all to go for: – anyone else would say ‘a nice pint’, or ‘a nice tod of whisky’ – but this was Jeremy Corbyn. He concluded with ‘a nice cup of tea’. My marching companion, Bob Marshall-Andrews – no teetotaller – snorted with laughter. ‘Only Jeremy’, he said, ‘would tell a freezing-cold crowd to go for a cup of tea’.

Despite capitulating to the cold before Corbyn arrived (I caught up on his speech afterwards on YouTube, and found it bland, but the main thing was that he gave it) – I thought that it would honour him appropriately to do as I did. I went home and had a nice hot cup of tea. 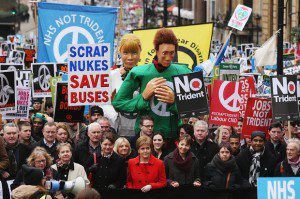