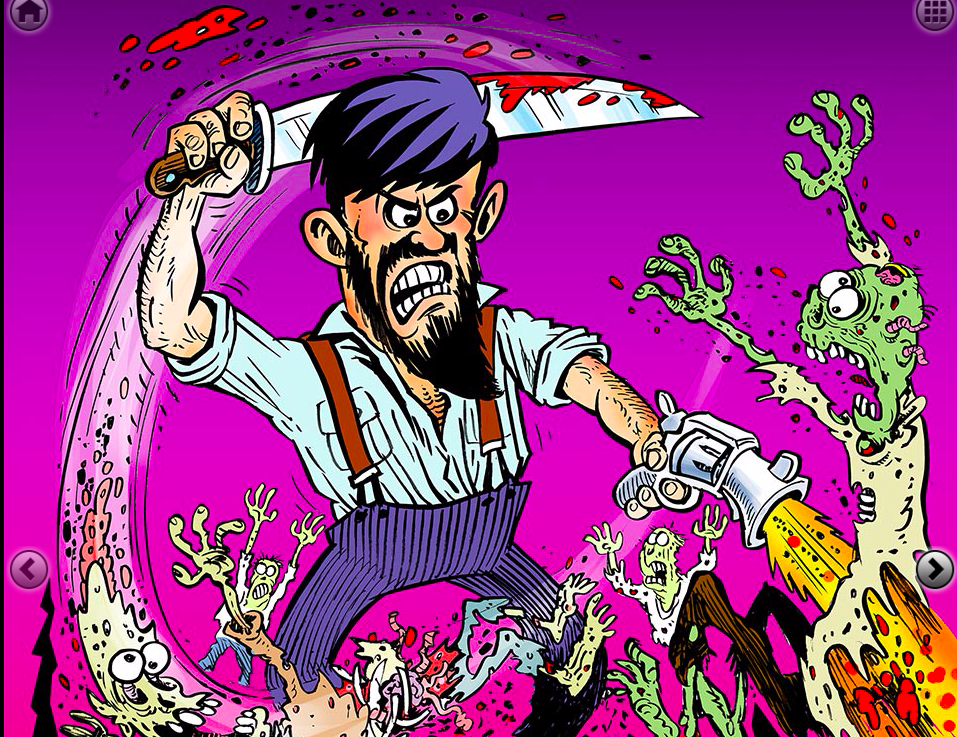 By Zoom (during the period of Coronavirus lockdown)

Christopher Miles, in Devizes in Wiltshire

Allan Walter, in Much Wenlock Shropshire

‘DHL was a real Mr Angry – the Basil FAWLTY OF LITERARY MODERNISM. He has sometimes been called the “high priest of love”, because of the notorious sexy bits in his books, but high priest of loathe would be more apt. You name it, he was driven nut by it. Among major twentieth century writers, his only rivals in rage Ezra Pound (who went mad from anger, and not in a pretty way) and Louis Ferdinand Celine (who may also have been mad; if he wasn’t, he’s probably burning in Hell.’

Kevin Jackson, Dawn of the Unread

The D. H. Lawrence Memory Theatre is the project of literary producer James Walker and digital producer Paul Fillingham to celebrate Lawrence in a manner fit for the modern age. In both digital and physical form, it unites the two inspirations of a) Lawrence’s travelling, and the trunk with which he did it, and b) cabinets of curiosities. It is a work in progress, built up by the ideas, writings, and handiwork of people interested in Lawrence in Eastwood and everywhere. Once funding and the Coronavirus permit, it is to physically tour the globe, as Lawrence and Frieda did. In this talk, James Walker introduced the origins and ethos of the project, and enjoined the attenders of the Lawrence London Group to contribute to the project, specifically on the Lawrencian subject of rage.

(illustrated by a Powerpoint presentation, with selected slides reproduced below) 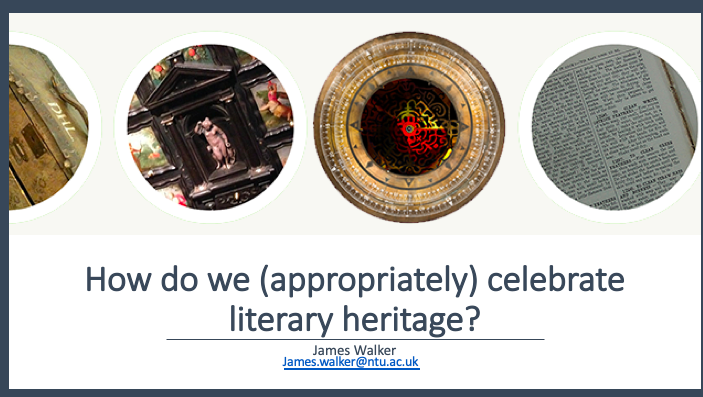 James started by explaining how he was concerned not just to celebrate literary heritage, but to do so appropriately. He noted that the Lawrence Society frequently discusses how to get Lawrence taught and appreciated in schools – but that, overall, the presentation of Lawrence in Eastwood is such that ‘if I lived in Eastwood, D.H. Lawrence would do my head in.’ He cited the names of various Lawrence-themed businesses, and concluded: ‘I’m interested in how another Lawrence project could repair the damage’. 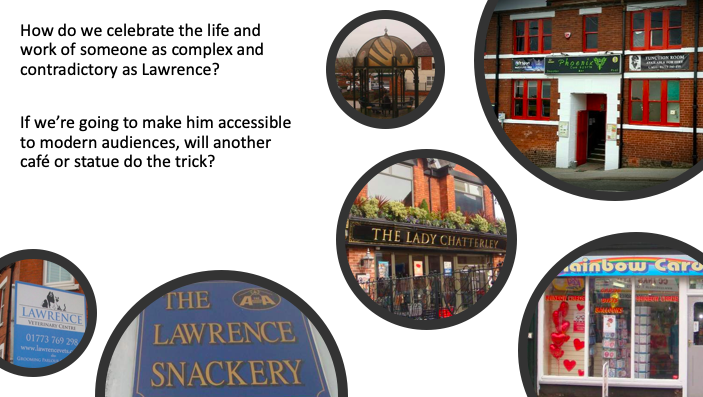 His project is to create engagement through co-authorship, co-imagination, and variety of subjective experience… 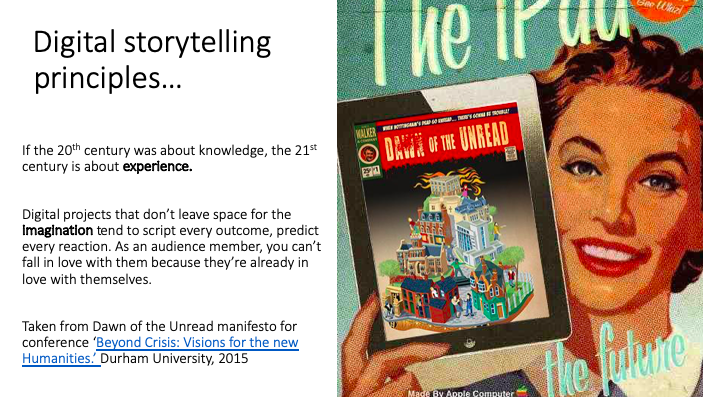 He gave as an example the Sillitoe Trail, which he helped create by breaking Saturday Night and Sunday Morning into key locations and themes. He likened protagonist Arthur Seaton’s lathe to our laptops today, at which we sit all day… 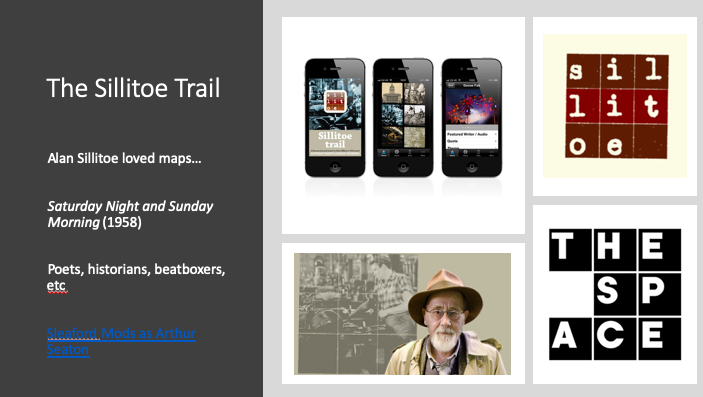 Another of his projects was Dawn of the Unread, amongst other things a cartoon intended to get the ‘unread’ of Nottingham’s great writers read again… 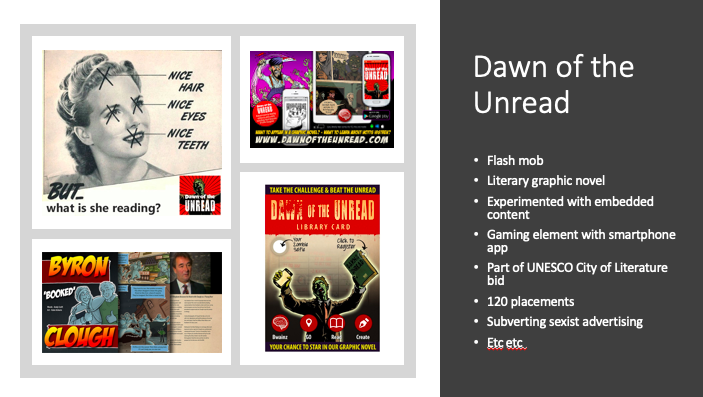 The project started as a flash mob of 300 people sitting down together in Nottingham to read. It developed further on YouTube, and as a graphic novel with embedded mini-essays (click on the stars…) 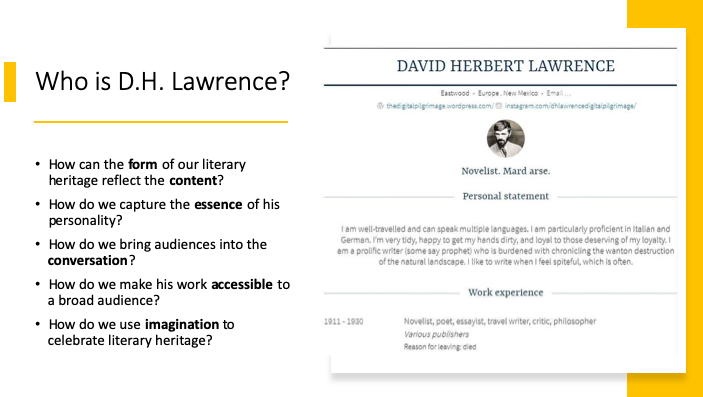 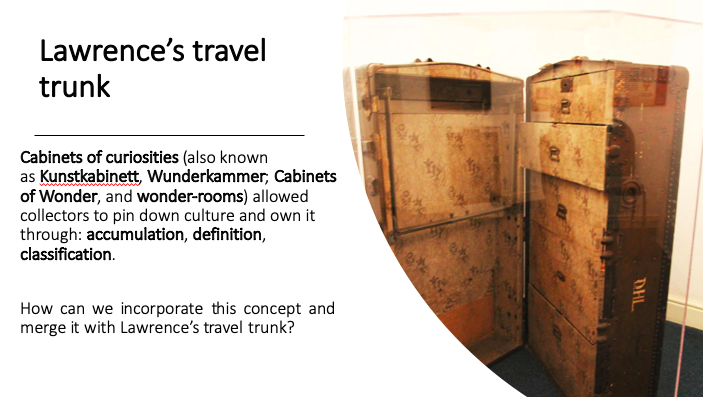 … and found that it reminded him of cabinets of curiosities. These compendia of knowledge in physical form, which originated in the Early Modern period, could be whole rooms… 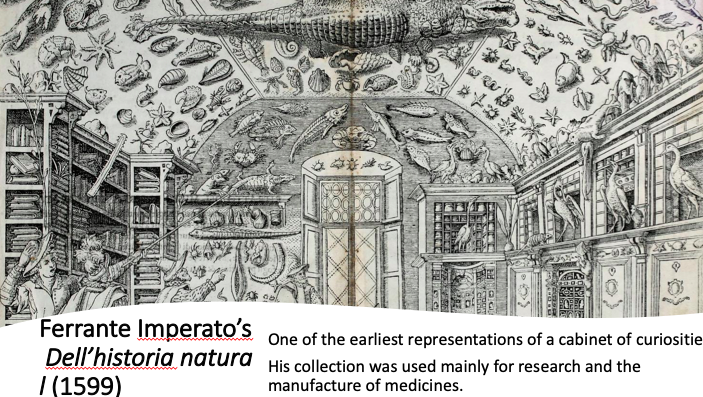 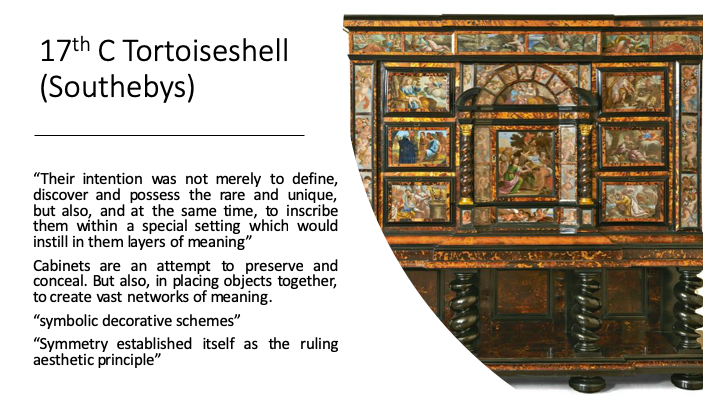 Over time they assumed a strongly educational role… 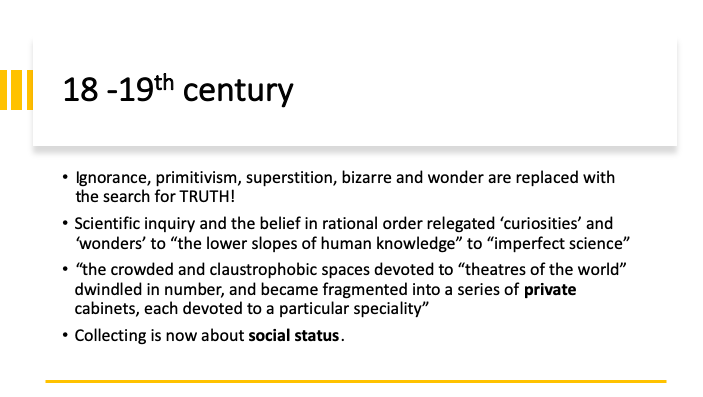 And today, James pointed out, the internet is like a cabinet of curiosities extraordinaire – ‘a rabbit hole you fall down’ – whilst Instagram is a modern memory theatre… 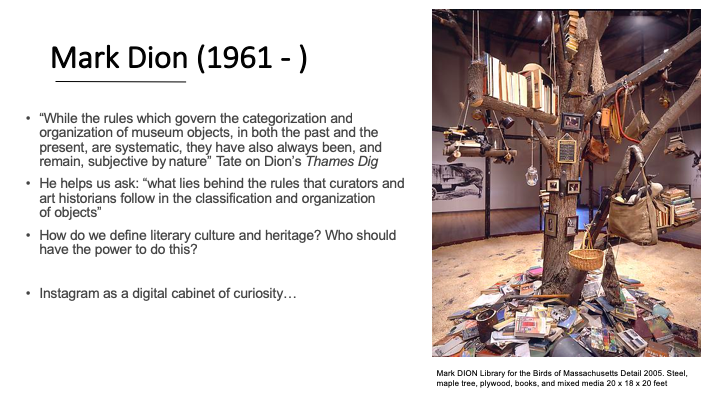 So he decided that he would like to create a D. H. Lawrence Memory Theatre – like a cabinet of curiosities, ‘but not called that, since Lawrence is not a curio…’ 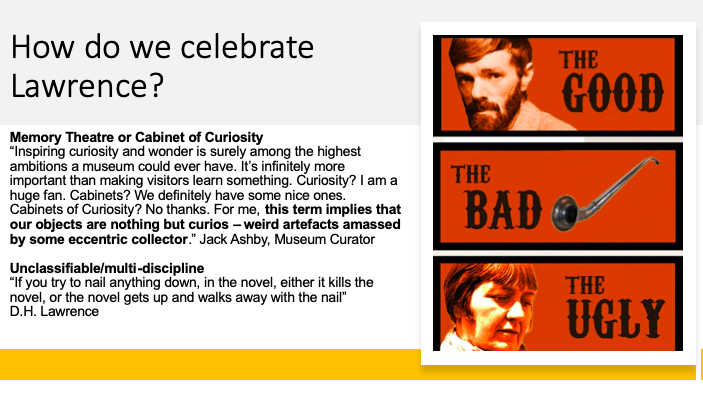 It would be flexible, not fixed. in Ceylon, Lawrence wanted to get the Buddha to ‘get up’. Casting him in bronze, therefore, ‘makes [James] want to cry’. 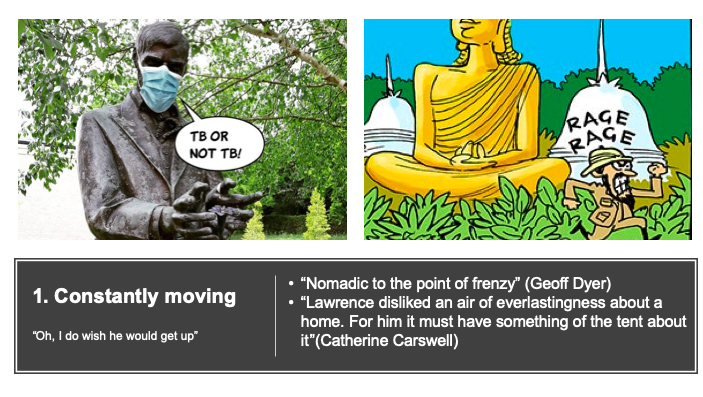 The Memory Theatre would have a physical as well as a digital form, and the former should – when travel is permitted again – move… 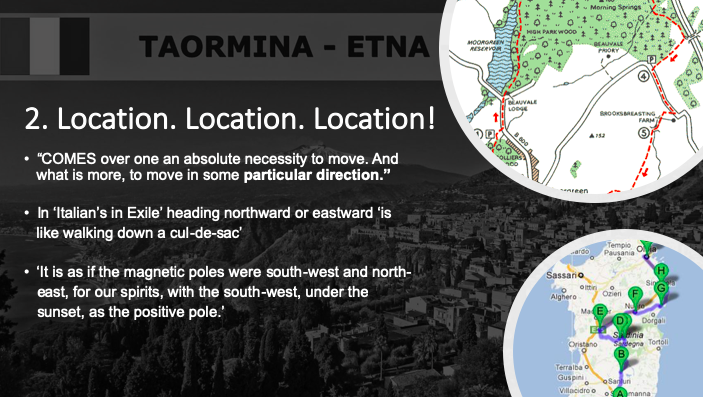 James wants the trunk to be made out of materials local to Eastwood, by Eastwood craft-workers. The project should put money in local pockets… 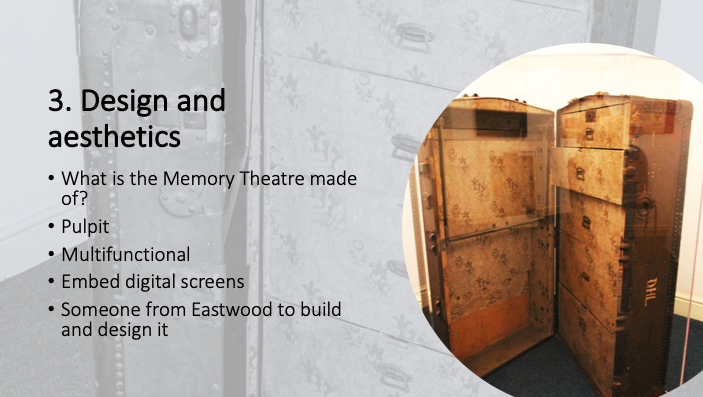 Lawrence’s life would be approached not chronologically but thematically.

For example, the theme titled ‘Mr Muscle’ celebrates Lawrence as a worker with his hands… 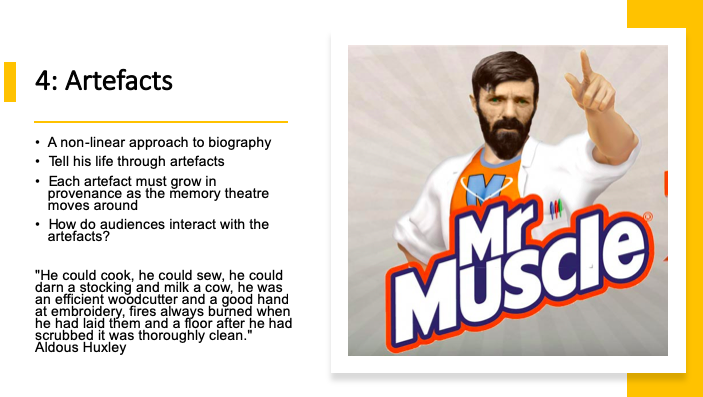 The ‘Nature’ theme should start with ten pressed flowers from Eastwood, and be built up with local flowers as the Memory Theatre goes round the world. 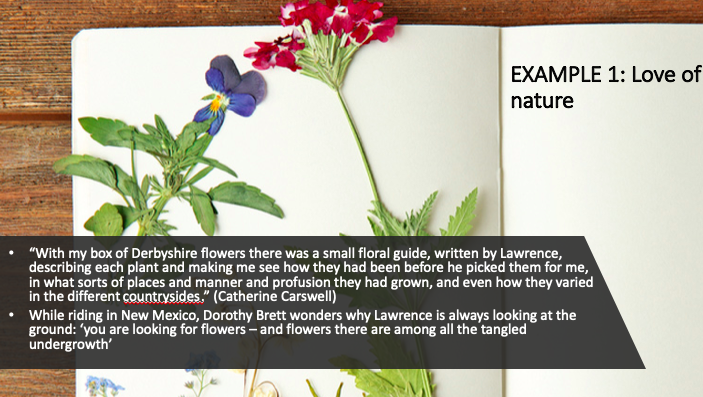 The theme of ‘Real people in his books’ could be evoked by a pack of playing cards, with which visitors to the Theatre could play a game of snap. Artists could be invited to paint them. 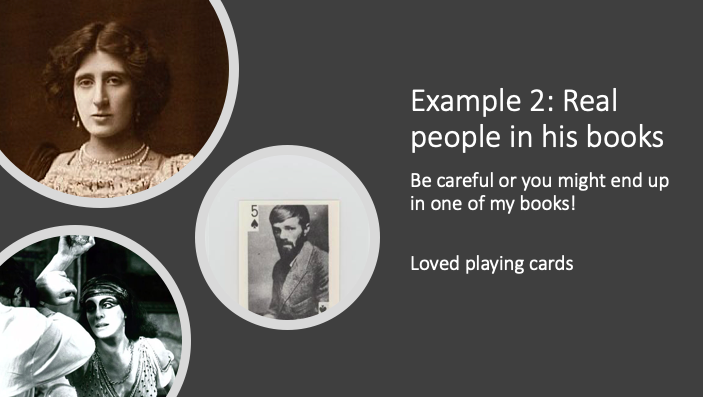 Finally, James invited the Lawrence London Group to ‘own’ the topic of ‘rage’, by suggesting appropriate artefacts, and by producing 4-5 essays of 600-1000 words on the subject of Lawrence’s rage. 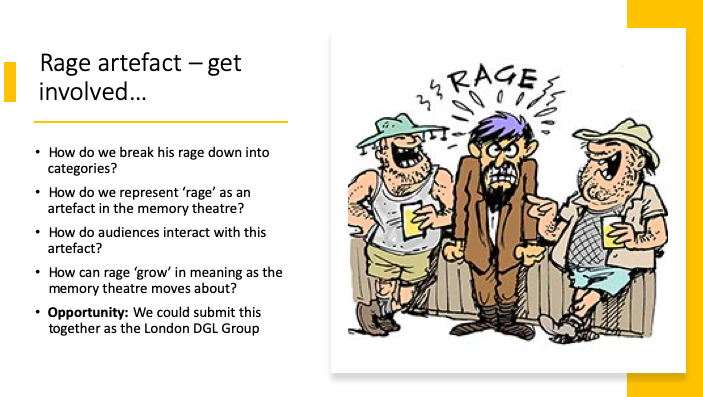 He provided us with some inspiration: 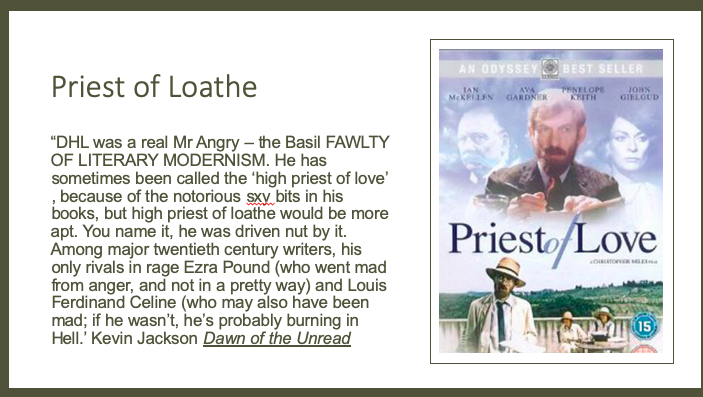 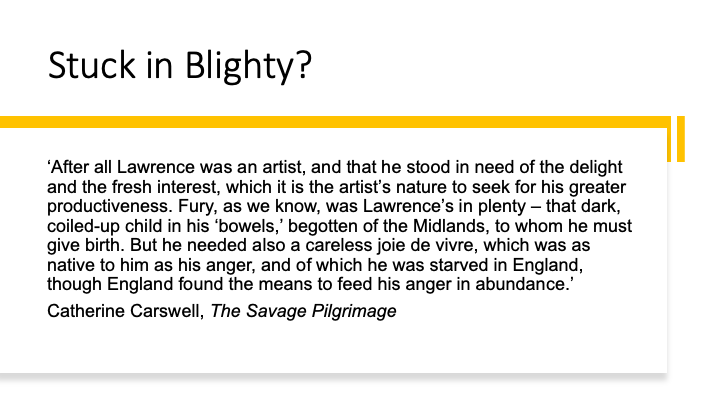 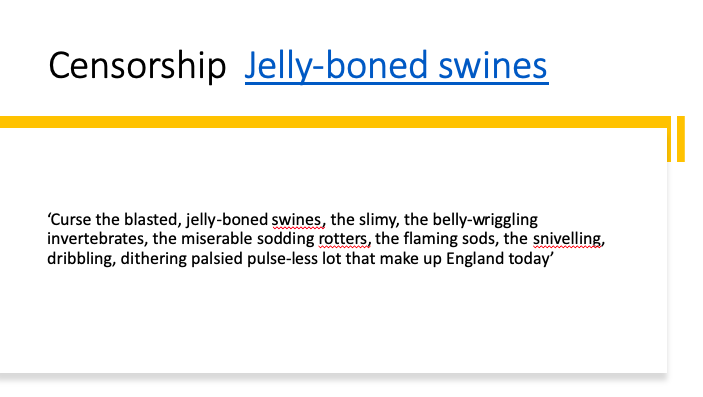 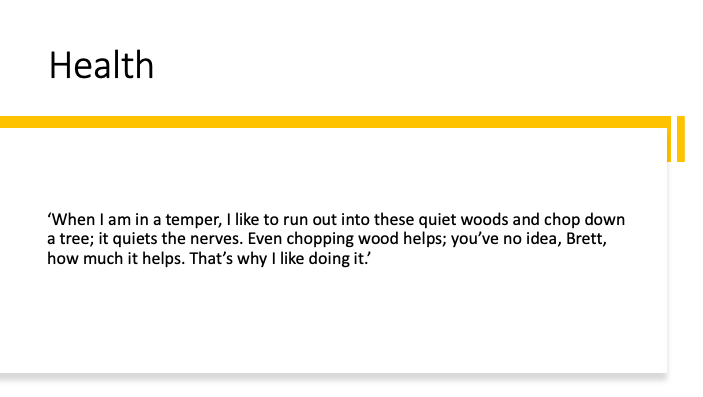 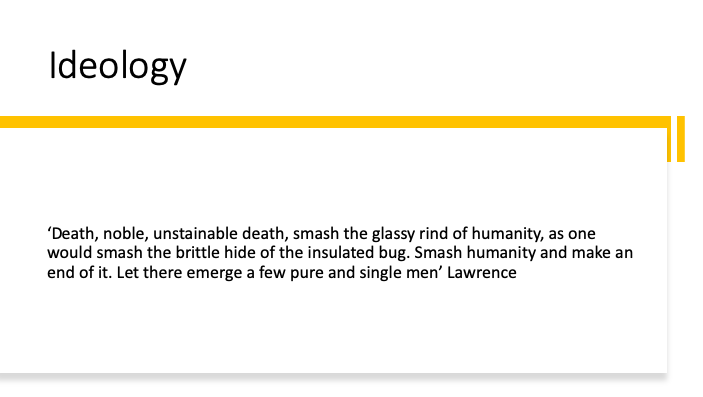 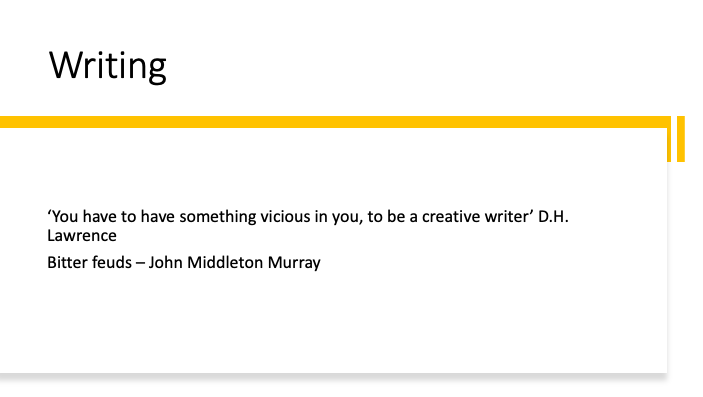 and finally reminded us of Out of Sheer Rage.

With respect to the idea of the Memory Theatre, Alex Korda adduced Matteo Ricci, a sixteenth century Jesuit who went to Peking and learned Chinese memory techniques which involved building mental palaces. He disseminated these ideas in Europe (and so one wonders whether they influenced Sherlock Holmes…). Nick suggested that the Theatre use some of the artefacts presented at the 2012 Lawrence Conference in Gargnano which he organised – including the key to the box at the local theatre.

Suggestions for artefacts to point to specifically Lawrence’s rage included:

The discussion moved on to typologise Lawrence’s rage. Catherine suggested that we diversify the vocabulary to include, for example, ‘choler’ and ‘wrath’. Kate pointed out that, though Lawrence manifested plenty of ‘negative rage’, he also understood ‘positive rage’, as we see acted on in ‘Tickets, please’. James said that, though Lawrence was certainly enraged by his poor health, ‘also rage kept him going. He’d have died in his twenties if he’d just sat down and taken it.’ Trevor suggested that there were two kinds of rage – the mechanical, such as is depicted in Gertler’s painting The Merry-go-Round, and the elemental, which is like lightening. Catherine suggested that Lawrence sometimes enjoyed his rage – or, at least, enjoyed expressing it, as in the ‘jelly-boned swines’ rant. This led to a consideration of the physiology of rage, on which we heard from yoga instructor Chloe, who related the spiritual physiology of Psychoanalysis and the Unconscious and Fantasia of the Unconscious to Vedantic philosophy, according to which a paroxysm of anger purifies, removes disease, and becomes a window to the absolute.

Finally, when Adam Lang related the theme to the current Age of Anger (explored by Pankaj Mishra in his 2017 book of that name), James concurred: ‘when it comes to causes of anger, we’ve never it so good.’