On Being at Home on Easter Morning

Posted on March 27, 2016 by Catherine Posted in Reflections 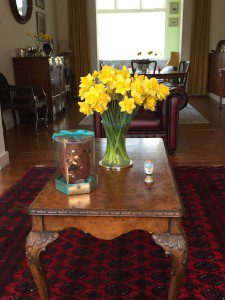 Church-going time, Easter morning, 2016. I am at home, looking at a vase of daffodils and a giant chocolate egg. Feeling out of time and place.

In past years I’ve had form on Holy Week. I was the intense kind of child that is much taken by the Passion. When I was thirteen I ignored my French exchange partner for most of Good Friday because I’d suddenly decided that I should spend the day in meditation. In Athens one Good Friday I cried over Christ’s coffin in the streets of Lykavitos. One Easter Eve I was thrilled to walk with thousands between Heidelberg’s Protestant and Catholic churches, stitching together by our route what the Thirty Years’ War had torn apart. One Easter morning at Notre-Dame-des-Champs in Montparnasse, my identification as a foreigner led to my giving one of the readings, in a memorably warm and welcoming service.

These moments were scattered over many years, during which my relationship to Christianity changed from earnest Church of England to intellectual atheism to agnosticism to theism and religiopoetry (working it out for yourself, as D.H. Lawrence encouraged us to do). My churchgoing pattern was simpler. Since my weekly attendance up to the age of eighteen, I have been to church only a few times a year – Christmas, an unquestioned, family ritual; Easter, discretionary.

Last year, I’ve no idea why, Holy Week came over me in a big way. I could see Palm Sunday advancing over the horizon of the Christian calendar. And I decided to go.

This church predates my own house in Kilburn by only three decades, and is a corresponding mile closer to the centre of London, built to accommodate the villa dwellers of London’s advancing North-West fringe. Now Hamilton Terrace is a Millionaires’ Row, but it isn’t palpably sinister, and the church has none of that bewildered relationship to its environment that one finds, for example, in Monaco Cathedral.

Palm Sunday Parish Eucharist was preceded by a procession. We gathered in the churchyard, and tried to keep our English self-consciousness in check even as we held our Palm Crosses aloft and walked a short stretch of pavement singing H.H. Milman’s ‘All glory, laud and honour’. ‘In lowly pomp ride on to die’. ‘The winged squadrons of the sky/ look down with sad and wondering eyes/ to see the approaching sacrifice’. It was a strange thing, on Hamilton Terrace. Altogether, the service’s hymns were the most important part for me, welcoming me, with their plangent Victorian familiarity, back to Christianity as I’d come to know it. All I remember of the address was how it ended. The Vicar encouraged us to go to several services in Holy Week. We should be glad of Easter, he said, in part by virtue of exhaustion.

Game On, I thought. After a few days without alcohol, or whatever it was, at the beginning of Lent, my Lent Fast had disappeared in a puff of apathy. Now I promptly banned a series of things for the rest of Lent. I resolved to relearn how to bake, and to bake hot cross buns, and make a Simnel cake, in time for Friday and Sunday respectively. ‘Go in the peace of Christ’, I was told. But I left the church burning with a latecomer’s zeal.

The next day, on which Christ expelled the Temple’s moneylenders, I cycled down Kilburn High Road, through Maida Vale, to St. John’s Wood Church – the great Neoclassical structure on the roundabout next to Lord’s – for Compline. This, too, was originally a fringe-of-London church, built for the population near the planned Regent’s Park. The coincidence of Thomas Lord’s name, and that of God, is less ironic than might be; the cricket ground and Church were blessed together on 24th May 1814. The church also cooperates with the neighbouring Liberal Jewish Synagogue, and the London Central Mosque, on discussions of scripture – truly, a roundabout.

The intrinsic darkness of Compline, and the bright white and gold of the Ionic Regency church, were mediated not by Victorian stained glass (which was destroyed in the War and not replaced), but by the original, 1814 box pews. These had amply as much of the night about them as the service wanted.

Very few people came. Those who did were nearly all over seventy. The preacher, a young Reverend Clare Dowding, spoke straight to the subject of death. She told us about a woman who became obsessed with ossuaries, and had found a sense of life in her travels around Europe visiting them. The preacher’s message was that, in the face of death, it is important to live, lovingly – as Mary had poured out the nard even in the face of Christ’s impending death. But I sensed that she was dodging something. Her message was dangerously close to the atheist injunction to live whilst one is alive – even to embrace finitude as adding meaning to life.

But the liturgy, of the service of com-pletion, got beyond where the thoughtful sermon could go. ‘Abide with us, O Lord, for it is toward evening and the day is far spent.’ ‘The Lord almighty grant us a quiet night and a perfect end.’ The antiphonal reading of psalms, with periods of silence, dislocated the linear flow of time in a way that eternity, to my understanding, requires. In fact if anything I would like the words of the prayer to have been reversed:

‘Preserve us, O Lord, while waking, and guard us while sleeping,

That asleep we may watch with Christ, and awake we may rest in peace.’

It is only by breaking the binaries of life and death, of waking and sleeping, that we are immortal.

Tenebrae on Holy Tuesday, at my parish church of St. Anne’s, Brondesbury, was in a very different building. Eighteen years old, domed, and shared with the United Reformed Church and Inter-Faith groups, it had a modest, neutral carpet and chairs. On this day Jesus cursed the olive tree and spoke of faith that can move mountains – the strangest of many strange preachings this week, reheard in the most tolerant of spaces. The light fell as the seven congregation-members extinguished the altar candles in turn, and the sun set outside. Only the Christ candle remained, and this was returned from the back of the room to the altar like the ‘flush of yellow’, and then ‘rose’, which reemerge from oblivion at the end of D.H. Lawrence’s poem ‘The Ship of Death’. But the metaphor that struck me most was the East window. The Millennial church overlooks, but does not give access to, a Victorian graveyard – Paddington Old Cemetery on Willesden Lane. The window’s clear glass reveals a beautiful meadow, gravestones, and a Neogothic chapel. How like the Victorians to confront death head-on; how like a modern church to be cut off from it; but how beautiful a view, with the candle shining over the graves.

On Wednesday, exhausted quicker than God, I rested, on the day that Judas took the bribe.

On Maundy Thursday I was out dining, whilst Christ was having his Last Supper.

For Good Friday I thought that I should go somewhere daunting and solemn, so I went to St. Augustine’s Church, Kilburn, the ‘Cathedral of North London’ – one of those buildings that look as though a late-Victorian Tractarian has taken an ordinary red-brick church and squeezed it laterally, to make its windows unreachable, and its spire all the greater an advertisement. The interior is all side-chapels and mosaics. Sir Giles Gilbert Scott, of Bankside Power Station, added the reredos in 1930.

I wore black. The congregation was sizeable, elderly, and ethnically diverse. They looked tough. And had need to be. The church was very cold. My black clothes were very light. But what were my needs? I tried to ask. The Priest and his two assistants prostrated themselves on the stone floor for several minutes. Golgotha was doubtless sickeningly hot. During what the Order of Service announced as ‘The Passion of our Lord Jesus Christ according to John’ we stood, and the choir sang. For thirty-five minutes. I started counting them. I tried to embrace the contrasts of cold and mosaics, fatigue and incense, and failed. When Jesus died, to my great relief, we were allowed to sit down. But promptly he rose again, and we had to stand again. We kissed the cross which had been paraded round the church – and in a sense, one can’t argue with this. Christianity is by some distance the most physical of the world religions. Yet this was too physical for me. To care about Christ’s pain, I found, I had to be sitting comfortably.

Easter Sunday, I thought, deserved a pilgrimage. So my partner and I found, through a complicated network of busses, St. Mary’s Church, Willesden. Its parish had encompassed Kilburn, when it was founded by King Athelstan in 938. Thomas More visited its Marian shrine just two weeks before his arrest. Now, this beautiful, low-lying Gothic church stands, in its graveyard, on a traffic island, in one of London’s least lovely reaches. We were among the few white people there apart from the Vicar, Father Andrew Hammond, who reminded me of Hugh Grant playing the part of a vicar. For the first time that week, I saw a church that was full. People shuffled to make room for us. The service started with a band with drums and a children’s choir. Yet the Hugh Grant Vicar made his style felt by having a censer swung, blessing the band, and doubling, with its clashing chain, as a tambourine. The sermon, on the theology of the resurrection, was richly and uncompromisingly intellectual. The congregation members, it was apparent afterwards, were affectionate towards their Vicar, and protective of him. At the end the children were allowed out into the graveyard to hunt for Easter Eggs. They burst out of the doors with delight.

Back at home, after another complexity of busses, there was fast-breaking with some very heavy Simnel cake. Christ was risen, and I was overfed and exhausted.

And then the Christian Year rolled on. Christ rose in my mind again, during Advent and Christmas, and then died again. Ash Wednesday came and went, and I was hardly aware of it. The shops are far less aware of Easter than of Mother’s Day – perhaps because we all have mothers but we don’t all have Easter. And then, this morning, with the daffodils and the chocolate egg, I realised that it was Easter, and that millions of people around the world were rejoicing exceedingly. I couldn’t just let it pass. 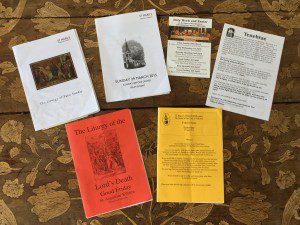