Loving Fictions: Why Do We Fall in Love with Fictional Characters?

This article was commissioned by an published on the website of IAI – the Institute of Arts and Ideas. It may be found here; what follows is a pre-edited version.

Hamlet was puzzled by it:

What’s Hecuba to him, or he to Hecuba,
That he should weep for her?

Thus he meditated on the First Player, who had just worked himself to tears whilst describing the murder of the Trojan Queen. Even Hamlet himself, as Polonius had noted, had ‘tears in’s eyes’. That we are moved by fictional characters (and Hecuba was fictional to Homer, let alone to Hamlet) has long been recognised. The grief felt by Victorians at the death of Little Nell in an 1841 instalment of The Old Curiosity Shop was remarked upon even whilst it was felt. But the deaths of Hecuba and Little Nell are managed deliberately – by Shakespeare’s player and the latter’s (fictional) playwright, and Dickens’s narrator, respectively – to rouse maximum grief. These characters gain much of their value from the manner in which their death is described, and to this extent their cases differ from those of characters loved similarly to actual people: for their qualities, their quiddity, or because they elicit a sense of affinity. But such cases also exist, and in abundance.

Generations of Russians have – at least so Russians believe – been ‘in love with’ Natasha Rostova, the vivacious, honest, sensitive, passionate heroine of War and Peace. Such characters, having been first created in readers’ minds by their authors’ words, take on a semi-autonomous life in their readers’ memory and imaginations (assisted, as the case may be, by stage, film and television adaptations). In this extra-textual life it is as the genre of realism in any case asks us to believe – that they do things even when the narrative eye is not upon them, and that they might behave otherwise than they do. Were the reader to somehow enter the fictional universe, therefore, they might elicit the character’s love; or, if they are characters (assisted, as the case may be, by paintings, posters and figurines) who imaginatively exist outside of not only the words, but the universes, of their literary works, then such a relationship might be managed – is indeed managed – in an imaginary version of the reader’s present.

Given that one of the functions of art is to render reality comprehensible, fictional characters may be the more loveable by virtue of their greater predictability and comprehensibility. Love for characters such as Natasha, whose dominant qualities may be generally accepted as deserving of love, can serve the same function as that form of eros which Phaedrus praises in Plato’s Symposium: stimulating good deeds. In this case, this may be by ethical imitation – if not of Natasha directly, then of the first man whom she loves, and who deserves that love, Prince Andrei. Alternatively, readers may feel that a given character is a soulmate, knowledge of whom brings them to a more developed state of being, rather as Aristophanes in the Symposium argued that love reunited the two parts of split souls that were originally one.

But other features of love for real people are likely to be absent. A willingness to sacrifice directly to the fictional other will be present only in rare, deluded cases when all sense of that fictionality has been lost. Iris Murdoch argued that: ‘love is the extremely difficult realisation that something other than oneself is real’; on this definition, love for fictional characters questionably deserves the name. Philosopher Simon Keller argues that love should be plastic, and should track change in the beloved, the decisive question being: ‘Is this a person with whom I would like to change?’ Although readers may change over the course of their engagement with a character, and their independent development may change the way in which they read the same character over time, no equivalent change is negotiated by the other party. J. David Velleman argues that love, like respect, is ‘aroused in response to another’s capacity to reciprocate them.’ This too is impossible in the case of fictional characters, and, for this reason at least, possessive jealousy is unlikely. My husband informs me that when he was a teenager, the boys in his class all fancied two women: Thackeray’s Becky Sharp and Dumas’s Milady de Winter – but none were jealous of these characters’ respective lovers, or even of each other. No more do readers typically offer monogamy; if Catherine Earnshaw is one soulmate, Bulgakov’s Margarita may be another, and no exclusivity is offered or required.

The issue is complicated when the lover is the creator, in which case the love may affect the work in a range of ways. Unwarranted indulgence may be shown, as John Casey has argued to be the case of George Eliot with respect to Will Ladislaw in Middlemarch, because of her attraction to him. A conflict may be engendered in a work’s rhetoric with regard to a character; Viktor Shklovsky, Mark Aldanov, Henri Troyat, Judith Armstrong, George Steiner, Mary Evans, and Harold Bloom have all proposed variants of the idea that Tolstoy’s condemnation of Anna Karenina was contradicted by his love and admiration for her. Evans argues that Tolstoy was captivated by her, and that for that very reason he had to punish her in order to break free from her control. Thomas Mann in 1939 referred to ‘our narrator’s love for the heroine he has created, to whom he deals out sorrow upon sorrow with anguished but unrelenting hand.’

A creator’s lust will make itself apparent in the focalisation and tone of narration. Critics such as David Lodge, Tony Tanner, Janet Freeman and Oliver Lovesey have studied Thomas Hardy’s decidedly male gaze on his female protagonists, especially Tess of the d’Urbervilles. As Freeman observes, after quoting a narratorial description of Tess’s face: ‘Much later both Alec and Angel comment in far less specific terms on that mouth and those eyes; Hardy, however, saw them first. He looked at them most closely.’ When Tess, to avoid sexual harassment whilst travelling across the country unaccompanied, cuts off her eyebrows and covers her hair, the narrative scrutiny remains close and appreciative, meaning that ‘Hardy has achieved an intimacy in opposition to Tess’s own preference’. Lovesey goes so far as to argue that: ‘The intensity of the narrator’s obsessively prodding and probing gaze on Tess’s body nearly renders the narrative a fantasy of procrastinated rape’. One senses that, like the Greek sculptor Pygmalion – prototype and archetype of all lovers of their own creations – he would indeed like Tess to come to life and love him; although, unlike Pygmalion, and his twentieth century avatar, Shaw’s Professor Higgins, he was at the same time capable of loving real women. That said, Galatea and Eliza were themselves fictional creations, of the same men who had given life to their creators; and, as the case of Ovid and Pygmalion demonstrates, scrutiny of the phenomenon provides no necessary immunity against it.

When life falls short in its production of loveable people, therefore, we can exchange it for the richer realm of our own or others’ art. A counterpart move is to imaginatively raise reality itself into the realm of art. Again, art may scrutinise this phenomenon. In Don Quixote, the protagonist declares a local farm girl, Aldonza Lorenzo, to be his lady love, and renames her Dulcinea del Toboso. As he describes her: ‘her rank must be at least that of a princess, since she is my queen and lady, and her beauty superhuman, since all the impossible and fanciful attributes of beauty which the poets apply to their ladies are verified in her’. In the fact that she does not reciprocate his love, she is true to the very role, of a knight’s inaccessible beloved, which he has imposed on her. It is a conceit which – as Phaedrus advocates – impels him to deeds of courage and chivalry, and it harms neither her nor – at least compared to others of his conceits – himself.

This has not stopped certain kinds of couples since 1847 from modelling themselves on Catherine and Heathcliff. Of these the most famous are Sylvia Plath and Ted Hughes. On their return to England from America in 1956, they immediately visited Top Withens, the Yorkshire ruin thought to be the model for the eponymous house. Both subsequently wrote poems entitled ‘Wuthering Heights’, and Ted’s compared Sylvia to Emily Brontë herself. I might add that four decades later, when I was studying at Cambridge, two of my fellow undergraduates – the male partner English, the female partner American, and both poets – were highly conscious of the antecedence in Cambridge of Plath and Hughes, and, through and beyond them, of Catherine and Heathcliff.

Both couples stand in an ancient tradition. Alexander the Great was brought up with the Iliad, and from an early age strongly identified with Achilles. When he then met his long-term friend and lover Hyphaeston, he modelled their relationship on that of Achilles and Patroclus. They both visited the tombs of their respective models. As Robin Lane Fox argues: ‘the comparison would remain to the end of their days and is proof of their life as lovers, for by Alexander’s time, Achilles and Patroclus were agreed to have enjoyed the relationship which Homer himself had never directly mentioned.’ At Alexander’s request, Aristotle ‘helped to prepare a special text of the Iliad which Alexander valued above all his possessions; he used to sleep, said one of his officers, with a dagger and this private Iliad beneath his head.’

In doing so, Alexander was not only raising his life into the realm of art, but raising art to the level of life: giving mythical characters concrete reality through identification with lived experience. It is partly in order to facilitate such a transition that so many novelists have gone through that obeisance to reality that is the pretence that their fictions are real. Don Quixote starts with the claim that most of the chapters were translated from the Arabic of a Moorish author, and that the events occurred to a real person several decades prior to the time of writing.

It is not too great a leap to point out that sex dolls, too, are increasingly being presented as though real. They are acquiring realistic skin, the ability to speak and move, and are being made available in brothels appearing across the UK. The contrary motion is also at play here; the real is being elevated to the level of art, as the silicone is filled with heaters, sensors, and programmeable voiceboxes, to the end of offering some of the emotional component of the sex experience. In a relationship with a sex doll, as in a relationship with Anna Karenina, the beloved cannot love back; there is no possibility of mutual development, nor of recognition of an equivalent and other subjectivity. A considerable imaginative effort is required on the part of the lover, in order to – like Aphrodite in Ovid’s account of Pygmalion – endow her with human qualities. The lover must, then, become an artist; but such art is solipsistic, and as such, may lose sight of its own status as fiction.

Yet if the imagination can, as in such cases, lead to a dangerous blurring of the distinction between fact and fiction, it is also capable – as in Wuthering Heights – of reflecting on that very danger. It can also sharpen our sense of those real human qualities that are worthy of loving, and of those which, in Catherine’s description of Heathcliff, are ‘more myself than I am’. As Viola in Twelfth Night ruminates, once she realises that Olivia loves her, believing her to be – as she is dressed – a man:

If category errors can limit one’s experience of life, then loving dreams can be not only better, but the very opposite. 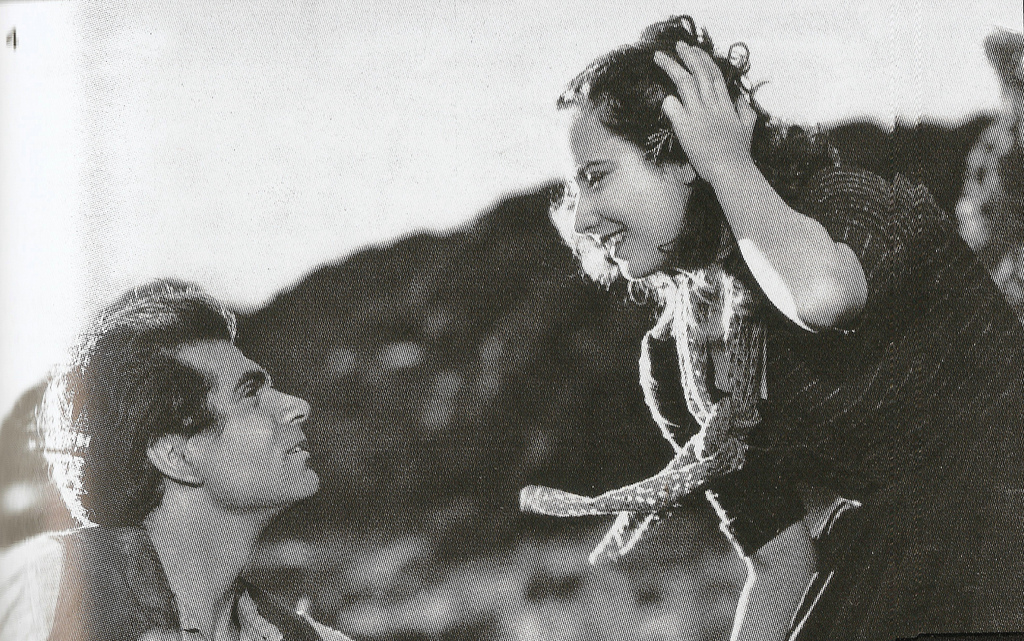