Lipstick on Your Collar: My Fascination for the Nineteen-Fifties

Posted on August 20, 2017 by Catherine Posted in Films, Reflections 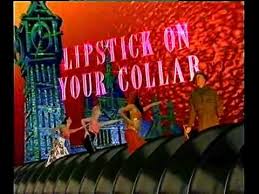 There are, I find, many advantages to being born relatively late for your generation. Your parents know pretty much what they are about; they grow old when you still have a strong arm with which to support them; and, most importantly, they connect you to a bigger historical span.

Such is my situation, and I was particularly grateful on the last count today, when I discussed with my father my latest discovery from Britain’s television archives, Dennis Potter’s 1993 Lipstick on Your Collar.

It is the third of a de facto trilogy of part-autobiographical miniseries orientated around the popular culture of the mid-twentieth century, following 1978’s Pennies from Heaven and 1986’s The Singing Detective. It is not considered to be the best of these, and has been criticised as repetitious in its use of lip-synching to famous song recordings. This is true, but in the context of television history it is like criticising The Winter’s Tale for not being Shakespeare’s best play, and for reprising earlier themes.

It concerns a gauche Welsh private called Francis (Giles Thomas) doing military service as a Russian language clerk in Whitehall in 1956. Every so often, in his imagination or that of his fellow clerk Mick (Ewan McGregor), the office’s officers break into disco-lit renditions of rock’n’roll hits – in startling disruption of the highly-starched, clean-shaven, clock-determined military discipline by which they are in fact ruled: each man in his seat by 9.00 a.m., coffee at 11.00 a.m., and so on.

What fascinates me is not the music, which, gave or take a few alterations of rhythm, instrumentation, melody and diction, is essentially the popular music in which we still live today – but the starch, the half-moon glasses, and the clock: in short, the side that lost, along with the British at Suez. That, and something else that we have lost: the spectacularly ugly domestic interiors, with their brown and yellow wallpapers, austerity furniture, and curtains of monstrous design. The meticulous recreation of such interiors in the 2003 biopic Sylvia seems to provide part of the explanation for Sylvia Plath’s suicide in London in 1963. My father missed Plath and Hughes in Cambridge by one year.

He would have overlapped with them longer had he not, like Dennis Potter, chosen to go to university after rather than before his National Service. As a result, he joined on 3rd September 1956, precisely in time for Suez. Like Potter’s Mick, he feared that he would be sent to Egypt, and then kept in the army for years. As it happened, the crisis had ended before he was out of basic training. He explained that Francis and Mick would not have learned their Russian at school, but in the services immediately before going to Whitehall; the Joint Services School for Linguists was founded in 1951 for precisely this purpose. Many such recruits (though not Potter) went on to become secondary-school Russian teachers, thus producing the next generation of Kremlinologists, and spies for one side or the other.

The music, my father remembered, was omnipresent during the two years in which he rose to Senior Aircraftsman – the only period of his life in which he has been in contact with popular music. It was played on a record-player that someone had brought into his billet, and also on the radio through one of the hut’s two speakers, the other being for public announcements.

One Sunday during Services Hour (a hangover from the War), the radio speaker was not working, but the men could hear rock’n’roll emerging muffled from the other billets. A few of the more daring of them managed to attach the wire of the radio speaker to the speaker for public announcements, after which they enjoyed the likes of Elvis Presley at full volume – until it emerged that their rewiring had in fact connected the entire barracks’ PA system – parade grounds and officers’ mess included – to rock’n’roll. Would that Dennis Potter – who finished his national service the year before this – had been there to see this.

I realise that I feel no nostalgia for my own happy, Yorkshire, childhood. Though to my students it will seem long ago, to me it barely merits the classification of being historical. The fascination that Dennis Potter had for his young manhood I have instead for my father’s, which is the same as Potter’s. Not just the stiff upper lips and awful curtains, the Brylcreem, lipstick and duffle coats, but the Greene, the Williams, the Narnia, the Beckett, the kitchen sink, the lords of flies and rings, the Hughes, the Plath, the Lolita, the Bond, the Pinter, the bomb, the marshalling of aid, the spies, the Mau-Mau, the Queen, the Everest, the Beatniks, the Vietnam, the Suez Canal.

This may change. The time may come when I realise that I too had a generation, and will begin to understand that time that I was ‘of’. I’d – again – be late to it, though. Potter made Pennies from Heaven when he was forty-three. Perhaps – in part due to absence of childhood trauma – I will continue to look forward. Or, else, back beyond my lifetime.