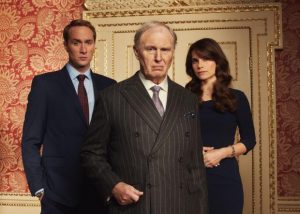 The closest Shakespeare got to (co-)writing a play about the monarchs of his place and day was Henry VIII, and that was six decades out of date. Three years ago English playwright Mike Bartlett wrote a blank verse play about the fates of kings, and the dalliance of a young Prince Harry with commoners, which was set in the near future. This month it was broadcast as a television film.

Oliver Chris as William, Richard Goulding as Harry, Charlotte Riley as Kate, and Tamara Lawrence as Jess are all good. Tim Piggott-Smith as Charles, elevated to the throne on the death of his mother, is excellent. Contrary to some reviewers of the film, I think that camera close-up and iambic pentameter can work well together, as they have on many a film adaptation of Shakespeare. The license-fee-payer has here financed a fine piece of art.

But the majority of the media commentary to date has been a response to its politics (whether or not partially wrapped in the guise of a response to its performances or versification). Much exception was taken, particularly in the conservative and Conservative press, to the treatment of real people: Charles is a near-saintly martyr to his conscience; Kate is power-hungry and dominates her husband; William, like Macbeth, can rise to the treacherous occasion when stimulated by his wife; Harry is convinced by republican argument and asks to renounce his royalty (to which Charles assents), before changing his mind and dumping his commoner girlfriend on the day of his brother’s coronation; Diana is a ghost who haunts both her husband and elder son, and who – shades of the witches in Macbeth – promises both that they will be the greatest king.

The Daily Mail went into conniptions, including over the disrespect that it claimed was involved in dramatising the Queen’s funeral. The Mail on Sunday published claims by a friend of Princess Diana that ‘the BBC is deliberately causing pain to a real living person in a salacious fashion’ by having Harry’s love interest Jess allude to rumours about the paternity of Harry. The Conservative MP Andrew Bridgen wrote that it was ‘unfortunate the BBC would seek to promote this flight of fantasy, which many licence-fee payers will find distasteful and which I believe denigrates and undermines our royal family.’ The Conservative defence minister Sir Gerald Howarth was similar critical.

Rupert Goold has stated that certain actors turned down parts even in the original play because of concerns about how it ‘might affect their future relationship with the honours system’, and that he altered some scenes in the transfer to film out of deference to the role of the public broadcaster.

One can make two, mutually-contradictory, rejoinders to such criticism.

The first is to say that the play’s treatment of its themes is sufficiently abstract that it has the aspect of a thought experiment about the possible and proper nature of monarchy in the present. The characters must perforce play the parts required of them by the experiment. The character whose original has the most grounds to be hurt by the play, the Duchess of Cambridge, is sufficiently distant from anything in her original of which the public has any knowledge, that this itself absolves the play from being understood as an interpretation of real people, as opposed to a meditation on their estate in life and in the land. The plot is too neat, too regular in its dramatic, audience-pleasing plot twists, to constitute a realistic speculation on what might happen were Charles to become King; no more is it a speculation on the real nature of the people involved.

The second rejoinder is to say that the play makes stabs behind the arras, guided by intuitions about the nature of the royals. So far, nobody has squealed; the Palace has been silent. It is perfectly plausible that Bartlett likes what he has seen of Charles (and Camilla) far more than what he has seen of any of the younger royals; that he finds Charles in good faith – slightly eccentric perhaps, and conservative in ways hard to understand for working-class characters such as Jess – but benign, sympathetically melancholic and conflicted, and a good father. It is also possible that, rather than taking the impeccably bland and camera-ready image of William and Kate as the outward form of people as bland and lacking in strong interests or principles as they appear to be – or as a compromise wearily made with the savagely demanding Hello culture for the greater good of the nation – Bartlett takes it as an indication of something calculating and sinister. In this sense, indeed, Diana haunts this play. One need only recall the national outpouring of grief on her death to know the contrast between the love which many people felt for her, and the feelings which are harboured for Kate. Gratitude and respect is accorded the latter for not letting the national side down by letting a hair, word, glance or gesture stray out of place – but she is not perceived as a mensch who will make mistakes, will sometimes even behave badly, and who will campaign about landmines – in the face of a landmine-exporting government – because she happens to care about the harm that they do. This type of rejoinder to the monarchist critique of the film, then, argues that Bartlett is criticising not an institution so much as certain people who happen at the moment to belong to it, least of all the current heir to the throne. And a true monarchist should not be interested in personalities; criticism of individuals of the royal family should be water off a swan’s back.

But it is not quite as simple as this, because – as the play rightly argues – the individuals who currently constitute the monarchy, and the future of the monarchy itself, have become intertwined ever since celebrity culture took the royal family in its mortise grip; Diana, as has often been pointed out, literally died of it.

The play’s propositions seem to be as follows:

The second point is questionable. Some people would riot, but if the bill which the monarch refused to pass into law were an unpopular one, would the streets really be as filled as we see in the film?

The first is interesting, presenting as it does the paradox that only by never exercising it can the royal family retain its political power. In this play, Charles makes the anguished decision to use it and lose it. But there is another kind of power inherent in the very fact of existence as a monarchy, especially in Britain, where the monarchy is emphatically not bourgeois, but sits ontop of an extant aristocracy, in possession of enormous wealth and land.

A royalism which desires the monarch to have no personal political power is an entirely coherent position. It prefers the apolitical stability of a hereditary system to the arguably less stable, semi- or fully-political system of presidencies elsewhere in the world. It welcomes the inertia guaranteed by the way that the monarch is stitched into every aspect of British political and legal life, including as head of the established Church. Such instititionalised conservatism has often and plausibly been proposed as one reason why Britain lurched less far than many European countries towards fascism in the 1930s. Finally – though this is less often acknowledged by its adherents – this position has the attraction of being, in its way, more egalitarian than meritocracy. Presidents who are selected on their achievements are in part being selected on their innate qualities, which they did nothing to earn. A monarch, by contrast, need do and be nothing; he or she may be as ugly and unintelligent as any random everyman plucked from the general population might be, and would still become and remain monarch.

Unless, of course – as in this play – he were to abdicate in favour of his more popular and politically-acceptable son. And that, as the film does not quite imply but is an obvious extrapolation from it, is one step towards its abolition (King Lear knows all about the personal and institutional risks of doing this, as does our current Queen, who has long publically ruled out abdication).

These are the kind of thoughts that this play prompts. My only reservation concerns the choice of the bill that Charles refuses to sign into law. It concerns statutory regulation of the press – coming, as the play did, one and a half years after Lord Leveson made his report on his inquiry into press behaviour. What a sad stumble on the part of an intelligent and compassionate play, that it should make Charles say sadly to Harry’s girlfriend Jess, whose topless photos sent to a former boyfriend are now splashed across the tabloids’ front pages, that the press do terrible things, but that he must nonetheless defend their right to do them, or else tyranny will result.

This is an error. Nobody has the right to destroy or damage innocent lives, as our press regularly does. Broadcast media are more tightly regulated – and do we fear tyranny because of that? What Lord Leveson recommended went to arduous lengths to remove the media from direct control by any government. Certain standards would however be upheld by statute, on pain of financial penalty – were Part 2 of Leveson, not yet implemented, to take effect. Now that the Conservatives have pledged not to implement Leveson 2 at all, we risk being left precisely where we were before we as a nation spent £5.4 million on the inquiry. The lengthy introduction to the report sets out the number of times that past investigations had been held into the faults and failings of the British press, which is equal to the number of times that its findings have had absolutely no impact whatsoever. This time, in 2012, it was meant to be different. A royal whose former wife had been indirectly killed by the press would, one would think, have sympathy for that position, and would not so completely have misunderstood Leveson’s intentions, and the implications of his recommendations (always acknowledging that the play does not mention Leveson directly; the bill might be quite different, but the play’s position in time is suggestive).

A final word. The real ghost of this film was not Diana, but Tim Piggott-Smith. He first came into my consciousness as the twisted Raj policeman Ronald Merrick in the 1984 ITV miniseries The Jewel in the Crown. At the time that he died, he was pouring Graham Greene’s The Honorary Consul into my ear in the form of an audiobook. Now, after his death, there is this. In all three roles he represents the English during one of their far-from-finest hours, and in so doing, as well as in so much else, he represented the English at their best. 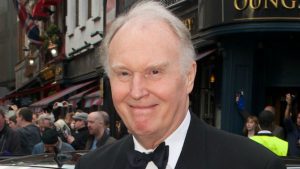