Leveson Now – or at the latest in a year’s time…

Posted on March 1, 2015 by Catherine Posted in Events 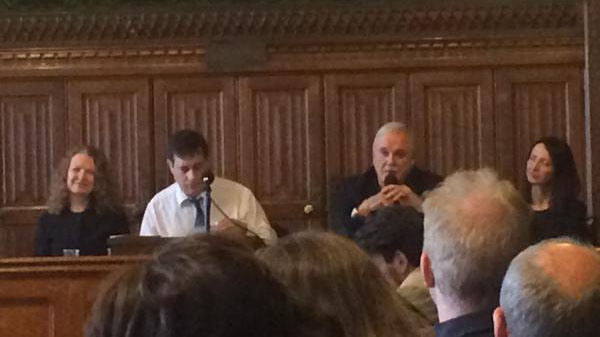 This week I attended a Parliamentary Rally of Hacked Off, the campaign ‘for a free and accountable press’.

I like the way that causes can use Commons committee rooms for an hour or three to rally their supporters and let them lobby their MPs. It feels democratic – as does the fact that once you’re through the security you can wander, apparently, anywhere. I had some difficulty finding my way up the right staircases and down the right corridors to the right committee room – a pleasingly big one, to hold all the Hacked Off sympathisers who wanted to come.

Like so much else about the House of Commons, the wood-pannelled room reminded me of Oxford University. Once we were seated and silent, and the Associate Director of Hacked Off quipped ‘You may now turn over your question papers’, the similarity between the committee room and the Oxford Examination Halls struck me forcefully. Whereby hangs a long tale of British political life..

We were there as ‘members of the public’ – an irritating phrase whenever it’s applied, as it always is, to anything less than everyone in a society. One of Hacked Off’s whole points is that noone is above the law, and noone doesn’t have a right to privacy. I was pleased to see Hugh Grant take his place in the audience without comment and without commenting, amongst the members of the public of which he is one. The term ‘press victim’ was applied to specific members of the audience, and by himself to panellist John Cleese – but Hacked Off believes, rightly, that everyone in British society suffers in one way or another from the current standards of its press. This press has provoked seven major investigations in as many decades, of which none has yet prevented the need for the next one.

The format was a series of speeches from a constantly-replenished panel sitting on, as it were, the invigilator’s stage. Labour, the Liberals, and the Greens were represented; it was not mentioned whether or not UKIP was invited (it should have been); and the Conservatives were communally derided for having sent no representative at all. They were accordingly represented by a teddy-bear until at the eleventh hour of this three hour event, when one MP turned up and the party’s honour was fractionally redeemed.

The event was also a lobby, which meant that those of the attenders who had made prior contact with their MPs met with them in the ‘lobby’ which names the practice. These MPs were asked whether they agree that Parliament should act to enforce compliance with Leveson’s proposals, in the following event:

The independent-of-politicians-and-the-press Recognition Panel, which was created by Royal Charter according to the recommendations of the Leveson Report, will soon be open to receive applications from press regulation bodies, in order to assess their degree of independence from politicians and the press, and their operation according to Lord Leveson’s recommendations.

Were IPSO (the body replacing the PCC) to apply now for recognition, it wouldn’t receive it. It is dominated by the editors of the newspapers most strongly implicated in the scandal which led to the Leveson Inquiry in the first place. (An alternative regulator called Impress, which aims to be Leveson-compliant, may seek recognition, but as yet no newspapers have subscribed to it). If, a year from now, the country’s major newspapers are not regulated by a regulator recognised by the Recognition Panel, then Lord Leveson recommends that Parliament should enforce compliance, if necessary by changing the law. At present the only incentive for a newspaper to join a recognised regulator is relative financial protection from plaintiffs; those newspapers which are not members of a recognised regulator would need to pay their plaintiffs’ legal costs even if they won the case; members of such a body would have access to low-cost arbitration.

This incentive is, it seems, unlikely to be enough. The evidence so far is that IPSO is strongly regulated in the editors’ interests; the committee which drew up IPSO’s code of practice is chaired by The Daily Mail’s editor Paul Dacre. One speaker, a campaigner on behalf of transsexuals, explained that under IPSO’s current complaints system plaintiffs are first required to negotiate at length with the newspaper concerned. In her case, she said, ‘the editor saw fit to write me a several-page letter monstering me and my organisation’. IPSO has also apparently claimed, in defence of certain papers’ headlines, that people don’t just read the headlines, but read whole articles – apparently failing to understand headlines’ raison d’être.

MPs supporting the taking of Parliamentary action in the case of a ‘Failure Report’ in a year’s time were asked whether they would lobby their party to include this commitment in their election manifestos.

But as it was, I had failed to contact my MP in advance, and was merely an auditor of the succession of speeches, of which the most moving was by John Cleese. He is a man who cannot leave his sense of humour alone even when at his most serious; he offered us anguished satire, repeatedly ventriloquising those who opposed Leveson with heavy, sad, sarcasm.

Harriet Harman, Simon Hughes, Amelia Womack for the Greens, and representatives of feminists, Muslims, transsexuals, and the National Union of Journalists, all supported the cause from their various standpoints. The support of the NUJ was particularly good to hear. Junior journalists who lack the platform of a Peter Oborne (who publicly resigned last week in protest at The Telegraph’s editorial subservience to its advertiser HSBC) are often inhibited from speaking out against press abuses for fear of losing their jobs.

To me, Hacked Off is so obviously right that those who find it sinister intrigue me. A Guido Fawkes journalist, present at the rally, tweeted in hostility to the event, likening it to a show trial of journalists. The audience member who picked up on this made it known to the room, at which point the journalist bravely identified himself and defended his stance. ‘Who are you?’ called out someone. ‘Yes, stand up!’ said someone else. At which emerged the chant ‘Up! Up! Up!’. Even liberal, older-rather-than-younger Leveson supporters are capable of such behaviour. Hugh Grant, I was pleased to observe, wasn’t.

And Chair Evan Harris was right to move things on briskly. This event was, after all, being held to give a platform to those who want to protect people from those with the loudest megaphones of all.

Tagged with: Hacked Off