Posted on February 20, 2015 by Catherine Posted in Events 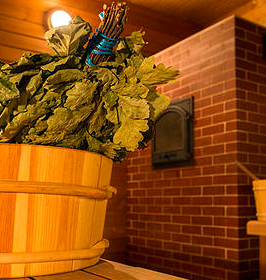 London has a banya. I stumbled across it in an advert, although it has apparently existed since 2013. On Micawber Street, off the City Road, Hackney. I tried to parse this. A street which was at some point in the 1920s or ’30s renamed in honour of David Copperfield’s fecklessly optimistic landlord (who lived around the corner on Windsor Terrace), now hosts a Russian bath. In the huge and durable Russian love for Charles Dickens there is something appropriate here. And there is also an irony. An area which was slummy when Micawber floundered there the 1820s, and when Dickens wrote about it in the 1840s, is now a centre of London’s high-end housing boom. There are sufficient Russians around, buying the flats and able to afford banya, to get this venture off the ground.

It was created by an expat, Ksenia Bobkova. At the age of seventeen she left the miserably lawless St Petersburg of 1994 in order to study law at Edinburgh University. After working in law and finance in London, she decided to do something to gratify her Russianness and her desire for banya, and convinced sufficient investors that sufficient people shared the latter. Today almost half its visitors are, like me, non-Russians.

Banya (which rhymes with ‘barn’) has several features which distinguish it from the Roman, Scandinavian, Finnish, Hungarian, Turkish, and East Asian variants on the theme of getting communally hot, wet, and clean. Its form of massage is beating with water-softened birch bundles. There is only one room in which to get hot, and although it is wooden rather than tiled, the heat is wet. The complex is small and…non-complex. There is a strong emphasis on the resting area, which crosses a café with a changing room. You are allocated a booth there on your arrival, and it is yours until the end. If the banya is not mixed, then in the female sections the women tend to attend to their bodies – heating, cooling, plucking, primping, painting, and otherwise improving them. The men, on the other hand, improve the shining hour with bonding, beer, and mutual confidences. Banyas attached to dachas are simple outhouses, and are no sign of great wealth. They may be used after an evening meal, by which point the dangers of adding high heat to intoxication are as ungraspable as real.

Banya No.1 fits the pattern of a standard city bathhouse. The booths, borshch, and beer are all there. The light in the booth was gratifyingly too weak to read by, thus banishing my vague academic’s sense of guilt at not reading something when lying around. I just lay and pondered – two things. First, what a relief it was to be connected with something Russian that had no whiff of politics, nor of the contemporary English Russophobia, detectable in it. Second, how earnestly the Russians take their health. They are a nation that talks about health a lot. Which, alongside the indifferent Russian life expectancy, reminded me that a common characteristic of the world’s longest-lived societies is unconsciousness about health matters. For Russians, banya – like the honey one eats there in spoonfuls – is an important part of a healthy life. However intense is the heat to endure in the moment, one reenters the world afterwards with a surge of well-being. I have always found the exact opposite. That the heat is exhilarating, and that afterwards I am knocked out – headachey and faint. In this as in other respects Banya No. 1 fitted the pattern. After staggering home from Hackney I went straight to bed, and felt, the whole of the next day, as though I should not reasonably be allowed in charge of a machine.

So – was it worth this hangover? Like many a party, it was. I chose my time well – noon on a weekday, when the entrance is cheaper and the place emptier. Even then, with ‘treatments’ the whole experience came to £80. My two treatments were a ‘washing’ and a ‘parenie’ with a blonde Latvian called German. The washing was done on a slab in a darkened private room, with hints of a massage. And, like any massage, the line between the medicinal and the sexual was fine. I arose clean, but with a slightly guilty sense that I had just paid for an experience that was a gentrified fourth cousin of prostitution. The ‘parenie’ (birch beating done in the sauna) was just as gratifying but the less guilt-inducing in proportion as it was the more bracing. German ignored my proffered Russian, and was abrupt in his English, but preferred body language, which was abundantly clear. I was to lie on my front with my face to the side resting on a wet bundle of birch leaves. He put further bundles on my head, and over and under my feet. Then he beat me, light and fast, on my back and on my front. I vibrated for long minutes in a sweaty  benighted birch forest. Then he deforested me, pulled me up, took my hand, pulled me out, and stopped me. He emptied a bucket of ice water on me. Pushed me forwards. Emptied another. Took my hand and walked me to a cold tub and told me ‘in’ and ‘down’. Pulled me up, pushed me down. Up. Out. Sit. He disappeared. Reappeared. ‘OK? Tea’. He pushed me towards my booth, his hand left my blushing back, and it was done. Health-giving? I doubt it. Life-giving? And how.