Michael introduced his talk as follows:

At the end of the Great War, when Lawrence was in financial difficulty from being virtually unable to publish, Oxford University Press offered him £50 to write a book for school children on European history which was published as Movements in European History. But as author of The Rainbow and prospectively of Women in Love he espoused a strongly mythopoeic conception of history. If the task of the professional historian is to remove myth from history was there some conflict or difficulty here? In case Lawrenceans around the world are lying awake at night pondering this question, I will reflect on the major terms, myth and history, and their possible interrelations, with a view to sharpening our appreciation of his historical vision. 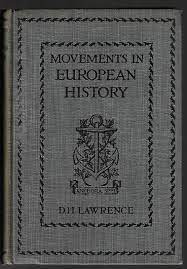 As Andrew Harrison has noted in his essay for D. H. Lawrence and the Arts, Lawrence turned his hand to historiography at a time of conflict between the view of history as scientific (which was that of the historian J. B. Bury), and the graphic sense of history, argued by G. M. Trevelyn, which aimed to enlist the imagination in recovering the life of an earlier time. On this view history is, in some significant measure, an art. In fact, Michael argued, the distinction is not a very philosophical one, in part because it is not clear what is involved in the latter model – vivid description, an omniscient narratorial mode, or fictionalising? Lawrence’s practice, for example, observed the historical protocols but was also vividly written.

A major earlier critic of the scientific view of history was Friedrich Nietzsche. In one of his Untimely Meditations of 1874, On the Uses and Disadvantages of History for Life, he argued that scientific history was neither desirable nor possible; no history is neutral because it is human, and interpretation – and therefore myth – cannot be fully extracted from it. Moreover, a truly scientific account of the past would give us no meaning, or possible instruction. And indeed, modern man, in so far as he has achieved this, is like a ‘wandering encyclopaedia’. The encyclopaedia knows everything but has no story or wisdom to impart. The ancient Greeks, by contrast, knew less than today’s historians but had an horizon of meaning through myth and legend. Their stories were lessons in life. Nietzsche’s essay presaged the huge interest in myth on the part of modern – and modernist – writers including Joyce. Lawrence’s ideas are congruent with Nietzsche’s: ‘the logical sequence doesn’t exist until we make it’; ‘history proper is a true art’.

Michael went on to note that when Mark Kinkead-Weekes was working on his edition of The Rainbow he was struck, and somewhat surprised, by the accuracy of Lawrence’s sense of the social history of the periods concerned. In fact, Michael argued, Lawrence’s historical accuracy is required to prevent the mythopoeic dimension being merely sentimental and emptily aspirational, so that the myth takes its force from its combination with public history. Moreover, the concluding, rainbow vision of the novel is actually Ursula’s in the first instance. In this way, the narrative acknowledges the subjectivity, and the relation to individual temperament, of that vision.

Women in Love also has a Biblical-mythical lens, although its apocalypticism is now much darker. The most dense and complicated case is The Plumed Serpent, in which Lawrence pursued a fictional-historiographical experiment in order to discover how far a revival of a pre-Columbian religion in Mexico could get today. He combines his historian’s sense of the present with a sense of the mythopoeism that has acted in human history – as is particularly obvious in Mexico, where myths have played clear causative roles. Octavio Paz, in The Labyrinth of Solitude, remarked that one of the major puzzles of Mexican history has been how the great military empire of the Aztecs could have been overturned by so few Spaniards, but, Paz claims, the Aztecs already felt they had been deserted by their gods, and Cortez’s arrival was initially taken to be the return of the god Quetzalcoatl. Cortez formed a relationship with a Mexican woman, perceived as the goddess Malinche or Malintzi, who served as his translator. Mexicans have subsequently had an idea of themselves as the descendants of this couple, making them ‘hijos de la chingada’ or ‘the children of the fucked’. That the relationship was in some measure willed by the woman, makes the sense of humiliation deeper and more complex. Kate Leslie’s entry, as a white woman, into the Mexican pantheon under this same name has the effect, psychologically, of reversing that historical-mythical humiliation.

Michael went on to note the relevant ambiguity of the title Movements in European History. There are movements, such as political movements, which are by definition conscious, but there are also earth – and bowel – movements which are involuntary. When the Goths and Vandals moved across the continent ‘some great impulse’ moved them East. Likewise Lawrence describes the movement around Savonarola as ‘a strange change’. He ostentatiously refuses to give explanations for these movements, as if leaving the space open for the mythopoeic dimension found almost everywhere else in his oeuvre. But he does assert that humans cannot live without hope or belief (for which reason Christianity sustained them through the Dark Ages). The term ‘European history’ is also ambiguous, between the history of Europe, and history as seen – and created – by Europeans. Is it what happened, or the sense that has been made of what happened? Overall, Lawrence’s sense of history combines conscious and unconscious, the factual and the mythpoeic, but above all, myth affirms the values by which history is to be understood and it can only do this persuasively if the historical account is itself complex, substantive and, in some sense, true.

Jim Phelps connected Michael’s discussion with Lawrence’s persistent idea of the tension between blood consciousness and the onslaught of mental consciousness, with ‘The Woman Who Rode Away’ presenting an alternative to the latter. Michael described that story as, like The Plumed Serpent, speculative, but not as endorsing the world view of the native protagonists. Jim Phelps responded that it was nonetheless an attempt to reach out to an alternative, and that this attempt has gained contemporary relevance in the context of our own ‘religion’ of death to our environment.

Andrew Harrison agreed with Michael that Lawrence made repeated reference to something happening that he would not account for, thereby giving a sense of the strangeness of the past.

For this reason Lawrence dismissed the contemporary accounts of Etruscan civilisation and created his own. Michael agreed and noted the crucial variable of available historical evidence; it is easy to give a vivid sense of the settlements of the encampments of the Gauls, but hard to recreate the world of the Huns. Terry responded by invoking Lawrence’s evocation of German tree worship, which was part of his attempt to get beyond the human perspective. He described Movements in European History as in large part the history of religion, and an attempt to psychologically inhabit earlier religions. In response Michael noted, however, that Lawrence imaginatively inhabited the German forest in the perspective of the Romans, not the Germans.

Catherine Brown suggested that a distinction might be made between the ‘experimental’ – which suggested scientific rigour – and the ‘speculative’. Michael said that he understood the ‘experimental’ to be simply trying something out. Zola spoke about ‘the experimental novel’, and thought he was speaking with the authority of science, but he was also speaking with the authority of myth. Catherine then asked to what extent Lawrence embraced the ‘great men’ (versus the social) conception of history. Michael responded that Lawrence devotes considerable space to the ‘great men’ such as Charlemagne – but also that he shows that when their lives come to an end, so does their efficacy.

Jim Phelps asked whether Movements in European History, being widely prescribed in schools, was not in fact more read than The Rainbow and Women in Love at the time. Keith Cushman responded that it was indeed successful. The first edition was very plain, and is by ‘Lawrence H Davison’; the 1925 first illustrated edition (under Lawrence’s name) notes that it was successful. There was also a 1926 Irish edition that had to be altered in its discussion of the popes and Martin Luther. These changes are detailed in the Cambridge edition of the book; they were not enough, though, and the book was still not released in Ireland.

Keith Cushman shared that he owns three old copies of Movements in European History, including the 1925 illustrated edition that was issued in both a large version and a regular-size; he has the latter, in a copy gifted to a student ‘R.H. Mays’ for ‘Proficiency in Form Subjects’ by the Headmaster of Tottenham Grammar School, W.J. Baldwin, in July 1929. He found it interesting that this book was considered a suitable prize to a prize student. He also owns Lawrence’s copy of the first Irish edition (inscribed ‘DH Lawrence, his own copy’) which also contains Frieda’s re-inscription to Harwood (‘To Harwood, who ought to have it! Frieda Lawrence’). Keith knew the younger daughter of Harwood Brewster Bacard, who had known Lawrence, and who had inherited the Brewsters’ books. She, Francis Hope, sold them. Most are inscribed to Earl and/or Achsah Brewster, but they are in poor condition because they took them with them into the humid conditions of India. Movements in European History, however, had not gone there, but remained with Frieda in the US.

Shanee asked how Lawrence had been given this commission, given his censorship at the time. Michael responded that there was a gap in the market for the book’s target age group, and that someone friendly to Lawrence, who was a school teacher, made the suggestion, with the provision that it would not be published under Lawrence’s name. As a teacher, Lawrence had created graphic history in the classroom, and the editor at Oxford University Press had heard Lawrence speak on history.

Nahla Torbay said that in The Rainbow and The Plumed Serpent Lawrence uses Ursula and Kate as a feminist voice. Michael responded that Lawrence certainly felt that he was taking women very seriously in his writing, and that he collaborated with women writers as he did not with men.

The conversation finally turned to problems in contemporary education, including the decreasing incidence of the study of whole novels in schools. Jim responded that the study of literature in South Africa had been politicised. Marina agreed that it was becoming increasingly difficult to teach whole novels, and also noted that 1984 had recently been removed from Belorussian bookshops.