Posted on October 21, 2013 by Catherine Posted in Plays 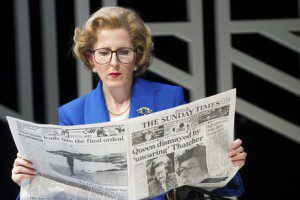 The Audience, with Helen Mirren as the Queen, was hugely liked and critically-acclaimed. So is Handbagged; the rest of its extended run at Kilburn’s Tricycle theatre is sold out, though it may make a West End transfer.

There are obvious reasons for both being popular: they are very well-acted, well-designed, well-constructed, and entertaining. They’re as well-mannered as the Queen doubtless is, and as witty as they (less plausibly) assert the Queen to be. Their left-leaning politics are likely to be liked by many of London’s theatre-goers: Thatcher was by far the least likeable of the Prime Ministers presented by Morgan, and Buffini’s sympathies are with the Queen’s hostility to certain of Thatcher’s policies (though she gives Thatcher lots of credit for courage). More striking is the Monarchism (or at least Neo-Elizabethanism) of both plays: they present the Queen as wise, restrained, caring, wistful, with a big sense of fun and (in Morgan’s play especially) wit.

So to triangulate: if a Hereditary Monarch = Good, and Margaret Thatcher = Bad, does that make these plays Old High Tory? You would assume so, but Buffini hardly represents the High Tory opposition to Thatcher which played such an important role in eventually bringing her down. Rather, both plays are leftist (in The Audience Harold Wilson is by far the most likeable of the Prime Ministers), and attribute their leftism, somewhat questionably, to the Queen herself. Both plays are therefore Monarchist-Socialist.

There are worse combinations, and this one might be thought of as charmingly – indeed reassuringly – British in its contradiction.

The two male actors who covered seventeen parts between them (ranging from Denis Thatcher to Reagan to Scargill to a footman) directly addressed younger members of the audience in order to explain the background to situations such as the assassination of Mountbatten and the Lusaka Summit. Looking around the Tricycle, though, most of the audience would in fact have remembered the period – which explained the palpable frisson when first one actress playing her (Stella Gonnet), then another (Fenella Woolgar), power-swayed their way onto stage at the play’s opening. ‘Hang on a minute: didn’t she just die?’ was the question likely to come queasily to mind, so vivid was the mimicry, the reincarnation.

Certain people who remember her, on the other hand, would not have come to see this play; nor would they have gone to see The Iron Lady (2011), so distressing would they find any further contact with her mannerisms, whatever the politics of their representation. When the two Thatchers entered the Tricycle stage there were theatrical boos as well as laughs and applause.

And that combination of reactions sums up the grounds for my reservation about this play. It wasn’t serious enough. You can love, admire, and applaud Thatcher. You can hate, despise and denounce her. But either way, she had and continues to have a massive effect on this country. Her politics are more dominant than ever. The one big national asset which she refused to sell off (an indication of her monarchism, which this play fully acknowledges: she said wouldn’t privatise the Queen’s head, therefore couldn’t privatise the Post Office) has just been privatised.

You might object that the aim of this play is precisely to step outside of the mainstream of political life and consider something essentially private: the relationship between two very different women of the same age, who met weekly for eleven years. But the very subjects of the disagreements which Buffini (and many others) suppose them to have had, are sufficiently weighty that this play feels a bit lightweight.

Given that its politics were anti-Thatcher, you would expect them – now, of at all times – to be blazingly so. But instead the play concentrated on the witty interplay of older and younger versions of the same character, on winsome metatheatricality, on laughs innocent of satiric edge.

On the other hand: when did you last see a passionate or angry new piece of political theatre? Enron? That too was too concerned with its own status as entertainment, and with explaining toxic derivatives, to convey anger. The metatheatricality of Handbagged only underlined its distance from Brecht’s plays. Its very title is an antifeminist joke. People whose livelihoods were destroyed as a result of Thatcher’s policies, and Thatcher’s admirers, alike, would be angered by this charming play, and by its charm.