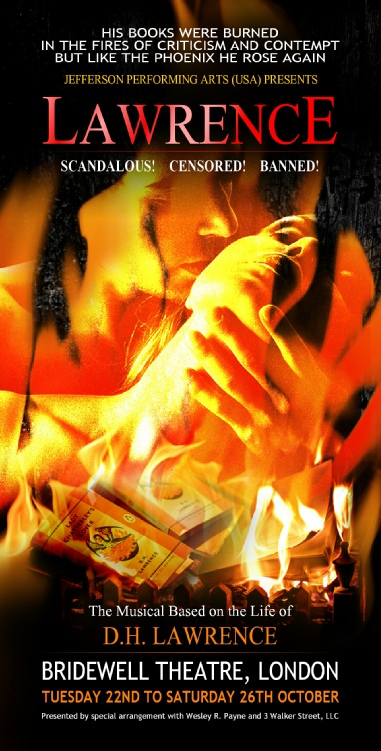 18 people attended, including, outside of England, Glyn Bailey in Covington Louisiana (near New Orleans), Simonetta de Filippis in Italy, Justin LaPoint from North Carolina, Maria Thanassa in Athens, and John Worthen in Germany.

Throughout the twenty-first century Nottingham-born, US-resident composer and performer Glyn Bailey has been working on a musical about the life of D. H. Lawrence. It had its first production in Eastwood in 2000, since when it has had several professional productions and undergone considerable evolution, including in its titles. Like Lawrence, the musical has been restless, and has travelled to the southern US. The evening’s presentation considered the musical’s origins and ongoing development, and was delivered in multimedia format by Glyn (the musical’s conceiver, composer and part-bookwriter), and his two colleagues Keith Thomas (director and part-bookwriter), and Stephen Duckham (director of the New Orleans production). The presentation was followed by a discussion. 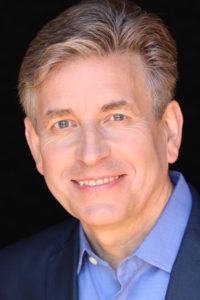 started with the latest name of this musical: Censored: The Musical Based on the Scandalous Life of D. H. Lawrence. This version both begins and ends with the UK/Penguin Books trial of Lady Chatterley’s Lover; by stressing the ‘censored’ aspect of Lawrence’s work and experience, Glyn wanted to engage in a critique of today’s ‘cancel culture’ and other modern forms of censorship.

He then returned to the beginning of the story, and how he had been inspired by Andrew Lloyd Webber and Tim Rice’s Evita (originally a 1976 rock opera concept album, then a musical, then a 1996 film), in the 1978 London production of which he performed a three-year stint. He conceived the ambition to write a biographical musical of his own, and wanted to find a subject who had the complex charisma of Eva Peron. He considered and dismissed Arthur Scargill, Napoleon, Florence Nightingale and Winston Churchill in turn – then thought of the local hero who had been under his nose all along. Glyn had grown up in Nottingham and studied Sons and Lovers for A level. He had since then travelled the world, and well understood Lawrence’s love-hate relationship with Nottingham, which was intensified whenever he returned there. He also realised that striking parallels existed between Lawrence and María Eva Duarte de Perón (1919-1952). Both escaped humble upbringings to lead inconsistent and brilliant lives, were self-absorbed and emotionally-erratic, generous and sometimes cruel, and died young. He also reflected on the fact that outside of Argentina the average person knew nothing whatever about Eva until a musical about her became an international hit. Lawrence was a far better-known figure, even though most people who had heard of Lady Chatterley’s Lover knew very little about Lawrence’s life.

By this point Glyn had embarked on a new career as an entertainer on cruise ships, and it was alongside this job that  he started on his new musical. The first song that he wrote was ‘The Country of my Heart’ (the played recording of which bore out Glyn’s remark: ‘Nothing wrong with this Lawrence’s lungs); he now uses it as a stand-alone song at the end of cruises, as the passengers return to the countries of their respective hearts. The second song – concerning Lawrence’s parents’ strife – was ‘Number 3 Walker Street’. Once he had a collection, the next step was for him to mount a fully-costumed concert performance to test the waters. This took place at the Eastwood Theatre in 2000, with Chistiane Noll as Frieda, Garth Bardsley as Lawrence, and Keith Thomas directing. One of the songs was ‘We kicked him out of Eastwood’ – not strictly true but, as Glyn explained, to be taken as a metaphor for Lawrence’s rejection more generally. The Eastwood audience’s response was positive, although some said that they would have preferred the music to be less Broadway and more folksy. But Glyn had made the decision to reach out to those who like traditional musical theatre. The production reunited him with Ron Faulks, who had taught him in Nottingham, and also connected him with Peggy Needham and John Worthen, all of whom were generous to him.

As the next step he knew that he needed to write a proper ‘book’ (or libretto as it is known in opera); indeed the more conventional way round is to start with the story and then write the songs. He felt that he had become too preoccupied by the early life, and a song about Lawrence being accosted at work by raucous factory girls was cut. One of the new songs, created once Keith Thomas had joined him as a book-writer, was Lawrence’s questing ‘I’ll be a writer’. And so a full-length musical began to take shape. The US premiere was a major production in 2009 in New Orleans, directed by Stephen Duckham and with Bart Shatto as Lawrence; this won the Marquist Theatre Award for the best new musical. Between 2009-13 Keith and Glyn worked on the book development, and organised a new production with a reduced cast of 9 and a 5 piece band which ran at the Bridewell Theatre in London in 2013. This was very warmly received.

At the 2017 International D. H. Lawrence Conference ‘London Calling: Lawrence and the Metropolis’ Glyn and his team extremely generously put on two medley concert presentations – one in St George’s Church Bloomsbury, and one in the Kensington hotel where the conference dinner was held. Next year, 2022, a local theatre company will be doing a full production which Glyn hopes will benefit from the recent upswing of interest in Lawrence, and will help the musical towards the long run that he has long intended for it. He played several of his favourite songs, including Frieda’s ‘How can I leave my children?’, Frieda’s ‘Look, we have come through’ (which also exists even more movingly in duet form), and Lawrence’s finale ‘I will rise like a phoenix from the ashes of my life’.

was contacted by Glyn in 2000 to help him with the Eastwood concert version. This had professional leads, but also included some amateurs from local theatre companies, and some local children. Keith devised some short scenes to support the songs, and over the next years helped Glyn to develop the book, relying heavily on John Worthen’s biography of Lawrence. He strongly believes that what people want now, after a long period of lockdown and trauma, is to get back into theatres and to be entertained; it would be a mistake to overload this musical with information, and important that people see their hero coming through in the end (as the phoenix trope of the final song, and Lawrence’s enduring fame, permit; a similar reflection on the subject’s longevity, and ability to resurrect, occurs at the end of Jesus Christ Superstar).

didn’t know a lot about Lawrence apart from the trial of Lady Chatterley’s Lover when he was approached to direct the fully-staged 2009 New Orleans production in a 1200 seat theatre, since Keith was unavailable. He had always worked in musicals, and liked the big Broadway sound of this one. However, he thought that the script needed work (it should assume no prior knowledge of Lawrence whatever), and that the title Phoenix should be changed to Scandalous. That having been already taken by another musical, the name became Lawrence: Scandalous! Censored! Banned!. He first went to Nottingham to meet Glyn, who accepted many of the changes that he was proposing. He then went to New Orleans, where the production received standing ovations.

Justin LaPoint shared that he had particularly enjoyed learning about the development of this musical, since he and Steven Newman are currently working on a play entitled Jessie and David. John Worthen recalled first hearing it sung by Glyn on his patio in Nottingham, when it was called Country of my Heart; indeed, he likes it in its chamber music form. He is also happy with departures from historical reality within musicals, provided that the subject is not being exploited. Jonathan Long suggested as a future possible title that of Frances Wilson’s recent biography, Burning Man. Keith observed that sometimes the right marketing can ‘make’ a musical, as occurred when Les Misérables (which had had no particular success in France) came over to England. It was generally agreed that the recent success of the long, demanding musical Hamilton proved – as that of Evita had done – that it is possible to make a musical about someone of whom few people had heard. And increasing numbers of people today are, it seems, hearing about – and are willing to think seriously about – D. H. Lawrence.