Posted on October 13, 2016 by Catherine Posted in Reflections 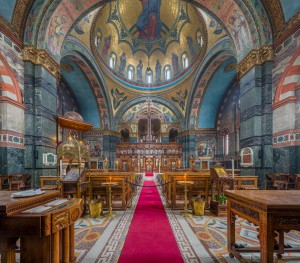 The coffin rested front and centre. The Priest – one of about three employed full time by the Church in London – moved and prayed around it.

An icon was placed on it, which the congregation was invited to queue up and kiss.

The liturgy was Greek to me. But it was clearly invariant.

It made no specific reference to the dead person, who will remain likewise unnamed here. The funeral was completely uncustomised.

So I was reminded of why I nearly wanted to marry my (Greek) husband in an Orthodox Church – that our service could not be customised.

No matter when in history we were marrying (after a certain misty Byzantine point), or what my estate, or what his, or what our tastes in music, flowers or vows, marriage would be done to us as it has been and will be done to all others.

Which is, after all, a large part of the marriage’s point – entrance into likeness with all other married people. If a couple prizes its individuality above all, then why would its partners marry?

But – balance in all things … we chose a German Protestant Church wedding, which we customised as little as the Church would let us get away with.

Uniformity strikes me as even more valuable at a funeral, death indeed being a leveller – of rich and poor, young and old, poor in spirit and rich in spirit. In the generic Orthodox requiem, the magnificent egalitarianism of Christianity is made spectacularly – and comfortingly – manifest.