‘Twelfth Night’ at New College of the Humanities 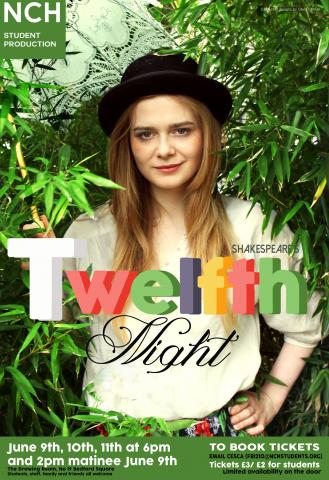 College plays serve many purposes. They train actors, illuminate drama to English students, develop friendships, and unite a College’s past and future. ‘Aha’, I will say to myself when I see certain students from now on, ‘There’s Sir Toby Belch’, or ‘There’s Sir Andrew Aguecheek’. Years hence, if I see those people again, part of me will still be thinking this; remembering them, as young adults, playing those parts.

Twelfth Night, with its distrust of puritanism, is a good choice for the end of the academic year. Any shunning of cakes and ale which had been going on during the exam season is over.

Of course, the play also knows about the melancholy of passing time, the grief of thwarted love, and the selfishness of excess. It marks the last night of the holidays, whereas the College played it on the first nights of our own holidays. But the production dealt with this tension by knocking off the play’s roughest edges.

Roughest of all edges lost was the taunting of Malvolio. It’s a brave scene (if unrealistic; in a black hole one does go mad after a few hours), which throws a spanner in the play’s hedonistic works. But this was an eighteenth century production played in the eighteenth century home which is 19 Bedford Square. Shakespeare’s most painful aspects were quietly dropped, leaving a happier, less morally-troubled play.

There was only one line of which I regretted the loss, because it is one of my favourite lines in all of Shakespeare.

It happens when Olivia, after a particularly robust rebuff from Cesario, says

‘Why, then, methinks ’tis time to smile again’.

After many an anguished hour, many a tear-stained pillow, many a desparate resolution to jump in the Adriatic or the Thames or into an order of nuns – deep in the depths of her soul, at last, a tiny sigh of boredom is heard. Boredom with grief, boredom with tragedy. Comedies have the last laugh, and they have to get going sooner or later. It may as well be now. After all the stuttering of unrequited love, the iambic rhythm of life lived forwards reasserts itself:

‘Why, then, methinks ’tis time to smile again.’

May this line come to us all, sooner rather than later, when we stand in need of it.

The acting of this production was generous and energetic; the directing was intelligent and assured. The SCR and its furniture acquired another palimpsestic layer, as the sofa used in last autumn’s production of Betrayal was transformed into Orsino’s couch. James’s Orsino had in fact more than a touch of Robert about it, but Jess’s Viola was no Emma – she was patient and faithful, brilliant and hopeful. Mike reprised his role in Oh, the Humanity as wryly detached observer, whereas Sir Toby and his ‘friends’ played with gleeful abandon. Mariella’s grieving Olivia had awesome yet vulnerable dignity. Paul’s Malvolio was likeable and dignified compared to most Malvolios I have seen, and I was glad of this. After all, we can’t eat cakes all the time; our obesity is already a burden on the NHS. Our discarding of the conventions of mourning has now gone so far that we have perhaps lost some of the emotional protection which they afforded. The desire to have sex with one’s female boss should surely raise no sniggers in the post-Lady Chatterley’s Lover world.

The line ‘Methinks I have sometimes no more wit than a Christian’ had a particular resonance in our College, with its noted atheists; but it is, after all, only an idiocy on the part of Sir Andrew.

His ‘Oh, had I but followed the arts’ was, by contrast, in nice accord with my own ongoing gratitude to myself for having done precisely that.

Tagged with: New College of the Humanities, Shakespeare, Twelfth Night