Posted on December 10, 2012 by Catherine Posted in Films

So I reflected yesterday evening as I left the cinema, having finally got round to seeing the latest Bond film (not ‘movie’, please; this film is assertively English).

All previous Bond films, even up to and including Casino Royale and Quantum of Solace, have obeyed the law that the first hour is the best: witty, sexy, crazily glamorous – and that the last thirty minutes are boringly explosion-filled, as the deaths of dozens of people we don’t care about occur, and those of thousands of people we don’t care about are narrowly averted.

This film starts slow. I was bewildered to find myself actually bored by the first forty-five minutes. Then it engaged me increasingly, as the plot tardily revealed itself. The real estate destroyed at the dénouement is, as in Casino Royale, a piece of history rather than a piece of futurism – and this destruction is not protracted for the benefit of those (probably) young (probably) males for whom an inversion of the law described above holds true.

In common with the two preceding films, this one concerns the conventions and ethics of the Bond genre itself. Casino Royale revealed that Bond has a human psyche with a history and a human body which, if pricked, bleeds. Quantum of Solace – remarkably, rightly, and as almost entirely overlooked by critics – pointed out that the real villains of the world are the kind of people who get commissioned by the CIA to overthrow governments of which the United States government wishes the world to be rid. Dominic Greene (its villain) is smooth, plausible, and free of physical defects. His actions in the Caribbean and Latin America are based on real events. This is the only Bond film in which the CIA itself – and its UK partner – is the enemy, and these are only redeemed by their AWOL rebel agents Felix Leiter and James Bond.

This having been accomplished, Skyfall takes the step of ignoring the United States completely. The CIA is never mentioned. Rather, it takes as its subject the ethics of MI6’s treatment of its employees, and finds them wanting. Accordingly it condemns M to death. Admittedly, the villain Raoul Silva – who was left at the hands of his torturers for five years in exchange for the release of five more obedient British agents – does not achieve his wish to obtain release from the PTSD from which he has suffered ever since, simultanously with his revenge on the person who gave him up, using the same bullet. But M outlives him by scarcely a minute, and since she is not violently killed, she instead seems to die of shock and guilt. This is the first Bond film which asks for sympathy for its villain. His physical deformity (a cyanide-ravaged mouth) is not the outward expression of his inner evil, but a practical consequence of his work for the British government. In relation to this critique, the bulldog spirit of the film’s ending, at which Bond presents himself as mentally fighting fit for his next assignment, sits oddly. Though perhaps what it is that Bond is fit to undergo is another two-hour trawl of the franchise’s politics. 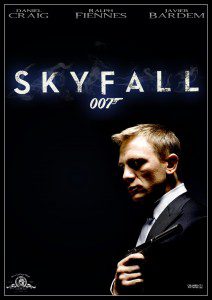 In accordance with this progressiveness: torture emerges as A Bad Thing. In contrast to Casino Royale, and modern events, there is no suggestion that MI6 engages in torture, nor does the film desensitise its audience by depicting it. When MI6 fails to rescue one of its agents who is tortured by an enemy, then it is the loser, as torture produces a terrorist, and more than five agents die before Silva does. The two female leads are respectively an authority figure and a Moneypenny who shoots, drives, and gets happy, consensual kicks with Bond. There is a sultry prisoner of the villain who appears in black spandex, a brothel tattoo, and Swarowski crystals part way through, as though she has belatedly wandered in out of a pre-Quantum film – but Skyfall quickly shows her out again. There’s just enough time for her to appear naked in a shower, before she’s dispatched by a single shot. The fact that the film doesn’t care about her is underlined by the fact that Bond only begins to overpower those who outnumber the pair of them – and three British helipcopters only appear miraculously overhead – after Silva has performed the function of ejecting her.

There are brilliant scenes. Ben Whishaw’s arrival as Q in the National Gallery is memorably scripted and acted. Silva’s arrival by helicopter at Bond’s ancestral home in Scotland is stunningly scored and shot; altogether, the cinematography is unforgettable in of all the Scottish scenes. The weakest element of the film is the screenplay. Too many lines which clearly purported to be witty fell flat – painfully so by comparison with the pre-Craig films or even Casino Royale. The best lines were utterly deadpan: ‘Yes’, ‘No’, ‘Goodbye’, and relied on Craig’s and others’ delivery.

So what can be next? This film focused strongly on Bond’s increasing age; this theme now needs to be given a rest. This film took us to Bond’s psychological and geographical childhood; the next film should probably give Bond-the-man a rest altogether. The obvious move is a return to politics, and a proper response to the War on Terror.

As a die-hard Bond fan and opponent of the War on Terror I await with great expectations.