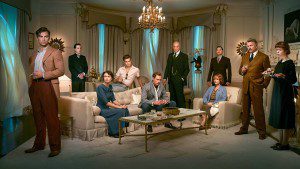 They form a poignant duo, these two works by a Conservative and a socialist, that respectively book-ended the Second World War.

On their shared topic – the punishment of wrong-doing which the law cannot or will not touch – they have nearly opposite perspectives.

An Inspector Calls sides with the avenging angel. Any good production will turn the mind of every audience member to any unatoned, unpunished wrong-doing on their own part (for what it’s worth, the BBC production chilled me to the core with guilt at past distresses that I have caused). Of course the play is not (just) about high-handedness and thoughtlessness of the kind in which the upper-middle classes of 1912 were easily able to indulge – otherwise what would have been the point of writing the play in 1945? Nor is it merely about causing miseries severe enough to result in someone’s suicide. I imagine that the first, Soviet production of 1946 missed this aspect, playing the action as comfortably distanced from contemporary Communist society.

By contrast And Then There Were None presents the avenging angel as psychopath. Justice Wargrave caring about unpunished wrong-doing sufficiently to spend the last months of his life planning and executing retribution upon it is presented as the greatest crime of all.

Of course, there are important differences. Whereas Wargrave imposes retributive justice (he is a judge), Inspector Goole merely inspects, makes findings, and tells the family to think on their sins. On the other hand, the Justice is concerned amongst other things with actual crimes that escaped the law, whereas none of the Birlings’ or Croft’s actions were even close to being crimes. In Ten Little Niggers (I will refer to the novel rather than to the adapatation, which sharpened several of the sins) the victims commit, in decreasing order of severity: murder (Thomas Rogers withholding medicine from his employer), mitigated murder (Ethel Rogers bullied by her husband into colluding with his crime), manslaughter (Anthony Marston killing two children by reckless driving; Dr. Armstrong killing a patient by operating whilst drunk), perjury and conspiracy to pervert the course of justice (William Blore for helping to sentence an innocent man to life imprisonment in return for a bribe), theft (Philip Lombard’s theft of food from East Africans whom he left to die), and – no crime at all – General MacArthur sending his wife’s lover to near-certain death; Vera Claythorne’s allowing of her charge to drown; and Emily Brent’s dismissal of her pregnant maid. All of them, however, receive equal punishment for causing death – just as Goole seeks to impose guilt equally on those he arraigns for contributing to a death.

There are two striking overlaps. One is between the middle-aged pious frauds Sybil Birling and Emily Brent (both played by Miranda Richardson in the recent adaptations) who respectively refuse to help, and dismiss, a young, unmarried pregnant woman, who thereafter commits suicide. The other is between the young women, Sheila Birling and Vera Claythorne, to both of whom their guilt (of having got a vulnerable woman dismissed from her job on a triviality, and of having allowed a boy to drown) strike home fully – in Vera’s case, to the extent of her committing suicide.

In Ten Little Niggers, however, there is little sense that justice is being done – precisely because it shares the detective-generic convention that those who are killed do not much matter in themselves. They must die, in order to provide a mystery, but their deaths are not morally meaningful other than by virtue of being murders. In this case victims’ wrong-doings add piquancy to their passing – but not justice, within the novel’s moral rhetoric. If anyone with a similar, unpunished involvement in death in their own past reads the novel or sees an adaptation of it, this viewing may be uncomfortable, but also edged with relief that a Justice Wargrave is highly unlikely to exist in fact, and that such a punisher of wrong-doing is the villain of the piece. I am reminded of Episode 6 of Series 5 of the 1960s cult television series The Avengers, in which the culprit mimics his own cartoon creation The Winged Avenger in murdering ruthless businesspeople. The Avengers, John Steed and Emma Peel, are the heterodox agents of the State who track The Winged Avenger down; the distinction of morality and sanity between them is entirely clear.

To Priestley, by contrast, wrong-doings are not rhetorically cancelled out by an equal or greater one; they exist, pure and unaltered by time, in a Puritan realm where the bar for serious wrong-doing is set frighteningly low. We all nudge people on to their deaths in this narrative universe. And, of course – in our own world of sweatshops, trade inequality, environmental disasters, and voluntary wars or fitness-to-work tests pursued by democracies using, or in order to save, taxpayers’ money – so indeed it is.

But can one live with this apprehension? Not really. So most of us exist, psychologically, somewhere between Christie and Priestley – between ‘But at least I haven’t actually murdered anyone, and anyone would commit a worse act than me in avenging such wrong as I have done’, and ‘There is no feast without cruelty, and I feast every day’; probably much closer to the first end of the spectrum.

Works of art which impose so-called ‘poetic’ justice on those whom the law cannot reach or has not reached, are of course common. ‘The good end happily, and the bad unhappily. That is what fiction means’, as Wilde’s Miss Prism points out. An operator outside of the law – a Hamlet, or a James Bond – is not required in order to execute such justice within the plot; the artist can do it simply by writing the plot. This is what happens, for example, in Anna Karenina. Despite its Biblical epigraph ‘Vengeance is mine; I will repay, saith the Lord’, the Lord who determines that Anna will die is Tolstoy himself.

Whether such works, which do not explicitly arraign their characters, can have the same effect as Priestley’s play in forcing readers to hold themselves to account, will vary between individuals. Anyone who feels guilty for having created marital misery may find the novel difficult reading. If they are, however, the eloping D.H. Lawrence and married mother Frieda Weekley, then they will read it on their flight in a ‘how to be happy though livanted spirit’ (Lawrence’s words), and with an utter determination to avoid Anna’s descent towards suicide. I am glad that they did so. They were reading not in a Christie fashion, but in a positive, life-seeking one. Nobody should be crippled by guilt. But – and thus far Priestley is right – it can be right to be not crippled but careful in the future; and, better, to do something positive. 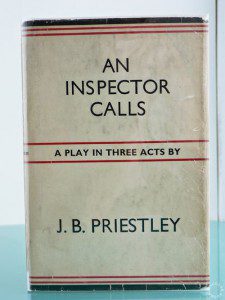