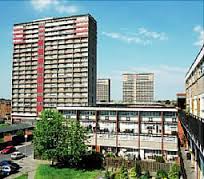 Revisiting the Beaumont Road Estate one Decade on: ‘Re:Home’ at The Yard Theatre 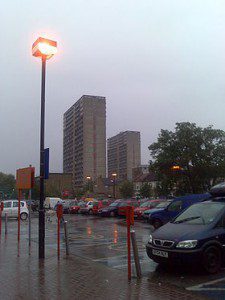 This Millennium, history in Leyton has moved fast. In 2000 the district was dominated by tower blocks of 1960s vintage. Now one remains. The population has changed too – it is ethnically whiter, a bit more gentrified, and there are fewer people overall, as the towers have been replaced by low-rise.

Re:Home seeks to document these changes over the decade since its own predecessor, Home (also by Leyton-native director Cressida Brown) looked at the Beaumont Road Estate during the last weeks of its towers’ existence in 2006. This estate was the last to be transformed. Home was a promenade piece in St Catherine’s Tower, of which one flat on the 9th floor was was filled by locally-found or locally-produced objects, art, grafitti and murals. The text was based on interviews with residents on the eve of the tower’s demolition. The current Re:Home is entirely verbatim – in part based on the 2005 interviews, and in part based on 2015 interviews with current and former residents. As far as possible, those who had been interviewed before were refound, whether or not they still lived on the Beaumont Road Estate (most do not). They were shown the footage of themselves ten years before, and reacted to it.

The script was devised by the cast of four: Waleed Akhtar, Hasan Dixon, T’Nia Miller and Rose Riley. They had clearly seen the interview footage, and were in part acting the parts of the interviewees, down to deportment and gestures. Doing this of course involves all the moral and ontological complexities of verbatim theatre, with the added dimension that those being ventriloquised were by and large of less privileged backgrounds than were their actors. But the production was aware of this. When four boys from the estate clearly ran amuck with the interviewing process, their stylised imitation by adult actors could be considered revenge, or even parody – but on the other hand could be considered as the boys’ exhuberance and wit taking over the actors and the play itself. Since the interviewer was always made present, no pretence was made that there was no experimental bias.

This sensitivity could only be apparent if the actors and production were technically proficient, which they were. The actors went abruptly and cleanly from one part to another, playing vastly differing accents, ages, and sexes often not their own. They were equally involved in, and detached from, from all their parts. They sat on raked ampitheatric seating, opposite and just like the audience, only that their rake had fewer seats, like a mouth with fewer teeth. The relatively-healthy position of most theatre-goers vis-à-vis most of their subjects was thus acknowledged. Onto this set (designed by Georgia Lowe), pieces of original and ersatz footage, and beautifully-unfolding grafitti (courtesy of lighting and video designer Richard Williamson) were projected. Names of interviewees, along with the date of their interview, were clearly but inventively projected – honouring them, but acknowledging the fact of their words having gone through an artistic compress, and come out as a play on the other side.

The narrative that emerges is as follows. The residents voted overwhelmingly for the demolition of their towers, and are still, overwhelmingly, glad that they they did so. The status quo ante could have been worse – and we see amazing residents, such as are always found in such places, who do what they can to hold their community together, and describe their estate as really not that bad after all. But it wasn’t good. We hear numerous accounts of suicides and gang killings, and as late as 2011, Leyton saw its share of the London riots. Very occasionally, we hear a bat-squeak of nostalgia for the tower lifts that didn’t work, and of the sense of community which surrounded them – but not much. Though things today are far from perfect, they are better.

Though this is good for all concerned, it poses a problem for the play. In its strong recapping of 2005 (about two-thirds of the script is based on the earlier interviews) it has the apparent structure of a nostalgia piece – but the facts, and the residents, forbid this. A mildly positive story is not, in dramatic terms, much of a story at all; drama requires extremes, arcs, plots, and striking incidents. So the script reaches for the last of these, and focuses in the last part of its seventy minutes on Frankie – one of four boys interviewed in 2005, as recalled by his friends in 2015 after his murder at some date inbetween. In this section it is as though the emotion of the interviewees takes over the script-devising process and determines that these boys will not be chopped and changed for other actors and other interviewees. Frankie’s story will be told – and it is.

There is no solution for Frankie, although one feels that revisiting him in the 2005 footage was a positive experience for his friends. But the play isn’t trying to provide solutions. Caustic remark is made by interviewees as to how little the 2012 London Olympics did for their area – but this isn’t a play of politics, but of record. Some strong laughs from last night’s audience suggested recognition on the part of people familiar with estates like Beaumont Road, even if not that particular one. And all of the interviewees have been offered free tickets; those still in Beaumont Road don’t have far to come. How they actually respond would be matter for another play… 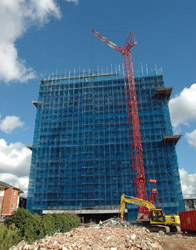 Review of ‘Mud and Stars’, a Russian Literary Travel Book by Sara Wheeler

MUD AND STARS: TRAVELS IN RUSSIA WITH PUSHKIN AND OTHER GENIUSES OF THE GOLDEN AGE   Sara Wheeler. Jonathan Cape, 2019, £20 hardback, 280 pp.   The following review was written for Literary Review, and is presented below in a longer, unedited version...

This article was written for thearticle.com. What follows is my pre-edited draft. The final article may be read here. Thanks are hereby expressed to editors Daniel Johnson and Olivia Utley.   JESUS CHRIST SUPERSTAR AND JOSEPH AND THE AMAZING TECHNICOLOR...