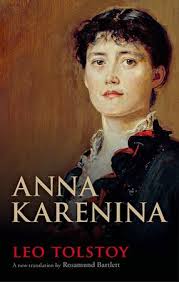 [N.B. This review appeared in The Independent on Wednesday 1st October 2014, p. 38. What follows is a pre-edited version.]

The appetite of English-speakers for Anna Karenina has been well-served. There have been twelve translations since Nathan Haskell Dole’s of 1886, four in this millennium, and two in this year. Bartlett’s is a particularly generous helping, with its explanatory notes and wide-reaching introduction. Bartlett takes the line that, despite the important differences between Anna’s story and Levin’s, ‘everything in the novel is interconnected and contributes in some way to its central theme’. She doesn’t, though, state what that theme actually is. Neither the poignant parallels and transitions between the novel’s stories, nor the Leitmotifs and characters uniting them, alter the fact that Anna’s story is ultimately about what to do (or not do) if you fall in love with someone who isn’t your spouse, whilst Levin’s is ultimately about why you should live at all (even if happily married), given that you will one day die. Anna can’t begin to perceive this question, which provoked Tolstoy’s own crisis at the time of writing the novel, because her romantic problems obscure it. Nor does Bartlett reveal her hand on who she thinks condemns Anna to death: God, a hypocritical society, Anna herself, or Tolstoy; though she rightly notes that Tolstoy shouldn’t be dismissed as a simple misogynist.

Her translation takes particular care with the specialist vocabulary such as, I confess, I not only have to look up when reading the Russian, but when reading English translations (‘the woodcock are roding’, Bartlett tells us, helpfully glossing that ‘the spring courtship flight at dawn and dusk of the male woodcock’ ‘is known in English as “roding”’). Overall, her translation is closer to the Russian in terms of sentence structure (often multi-clausal), and register, than are those of Constance Garnett, the Maudes, and Rosemary Edmonds. But it is less so than that of Pevear and Volokhonsky, and her English is correspondingly more idiomatic than theirs. Like them, but unlike Dole, Garnett, and Edmonds, she doesn’t attempt to render Russian peasant dialect. She translates ‘muzhik’ as ‘peasant’, and retains Russian only for the best-known and least-translatable words such as ‘dacha’. Like her predecessors, she slides over some of Tolstoy’s archaisms. Levin claims that his life will have the meaning of good which he is ‘vlasten’ (empowered) to put into it; Bartlett’s Levin simply ‘has’ ‘the power’. Again, like her predecessors, she says that the candle representing Anna’s life ‘went out for ever’. But ‘navsegda potukhla’ is ‘forever went out’. At such a moment, it matters whether ‘forever’, or extinguishing, ends the chapter.

But this is a fine new translation, of which the scholarship demonstrates Bartlett’s considerable knowledge of the author. It is a welcome contribution to the ongoing life of this enigmatic, divided, passionate work.