Life and Death in Pompeii and Herculaneum

Posted on August 29, 2013 by Catherine Posted in Exhibitions 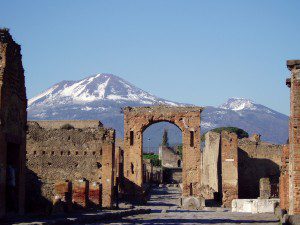 The focus of this exhibition is life rather than death. The reason why we know so much about these towns, and the main reason why we are interested in them, is that they were spectacularly destroyed. This exhibition tries to present the kind of life which was destroyed. It does so with generous loans from the Archaeological Superintendency of Naples and Pompeii, including: a hallucinatory fresco of an octopus and attendant sealife; a bronze garden chime fashioned out of a phallus which itself has a phallus; a sculpture of Pan having sex with a goat; a marble sculpture of a stag being attacked by dogs. There are also, towards the end of the exhibition, the signs of death: the carbonised bread, figs, chairs, people. But this is at the very end. Most of the exhibition is laid out in space rather than time, on the plan of a rich Pompeiian villa. Exhibits are arranged according to the room of the house in which they would have been kept.

The main message seems to be this: the Romans living in the Bay of Naples around eighty years after Christ was born were very much like ourselves. They liked interior design and good food; they showed off wealth when they had it; women could wield influence within and beyond their households; they liked looking at pictures of sex. And it is of course the case that we do ressemble the Romans, in comparison to many other ancient, and even many more recent, peoples, to an uncanny degree. But that makes the differences the more interesting. And in understanding these – as is the case in so many recent archaological exhibitions – the curation gives us no help at all. It points out the similarities between the position of household slaves then and home helps today, but does not try to help us understand why herms (sculptures of heads, with flaccid penises attached an appropriate distance below) were seen as appropriate forms of statuary, and neither bizarre nor ridiculous. ‘Phalluses were seen as protective’, several of the labels blandly, and unilluminatingly, announce. It was for the viewer to do the work of discerning what was truly strange, rather than familiar, in the villa we were touring.

But my main complaint about the exhibition is its limited ambition. It had – literally – the room to do more. It aims to give us a sense of domestic life as lived by the rich in this corner of the Roman Empire two millennia ago. It does not aim to give us an overview of life in these towns – otherwise it would have mentioned the theatre in Herculaneum and the amphitheatre for blood sports in Pompeii. It would have mentioned the imperial villas in both. It would have given a picture of political and religious life. One comes away from the exhibition thinking that the Pompeiians did nothing but eat, have sex, and admire their beautiful gardens and bawdy garden ornaments. There is little mention of how they earned their living, worshipped, or spent their leisure outside of their homes or local bars. The result is that any grief which one might feel when contemplating the eruption is attenuated. It was merely some fig-eating and love-making which got interrupted – not the operation, in complex urban centres, of life in all its dimensions.

The curators state that the statuary indicates the earthy way in which the Romans conceived their deities. But it is far easier to make such an inference when one knows a fair bit about Roman religion in general. The exhibition as a whole operated on two levels: entry-level (giving those who knew little about the Romans a feeling for a rich person’s home), and advanced (providing fascinating detail for those who already knew enough about the Romans to put the objects into a wider context). There was the odd mention of voting, but nothing about what voting meant – who did it, electing whom, in the first century of the new empire. There were statues of gods, but no explanation of how these statues were treated, nor of worship practices, nor of the local temples. Almost every dimension of life is extrapolable from the objects in a home – but only if one has the context to bring into that home from outside it; and this exhibition did not provide it.

There was an implicit sentimental conflation of ‘real life’ with ‘domestic and/or leisured life’. The concentration on a single house made it seem that the people of these cities were singularly inward-looking, as opposed to being citizens of the world’s largest empire. As a result, when the volcano hit them it was all the more distressing; how were they to have known about Vesuvius when they hardly ever ventured past their atria? There was no map of either town – otherwise landmarks such as the temples, theatres, and imperial villas would have been visible (and the failure of the exhibition to address them the more obvious). There was no history of either town; they simply were – until summer or autumn of 79 AD. No historical personages lived there – except that they did, for example the Empress Poppaea from Pompeii (wife of Nero, and subject of Monteverdi’s opera The Coronation of Poppaea), and Caesonius Piso from Herculaneum (father-in-law of Julius Caesar). This was therefore an ahistoricist exhibition, which sits oddly with an archaeological presentation by definition. There were a couple of mentions of the excavations in the eighteenth century, and of the modern reactions to some of the artefacts uncovered – but it would have been nice to have been provided with a clear overview of what ‘Pompeii’ has meant in the cultural imagination of the West since its rediscovery.

There was some mention of slaves, but of a kind which overstated the kindness of their treatment. The comparison of slaves to the home helps of today was absurd. Naturally, slaves have left fewer, less eye-catching, objects than their masters, and so are less easily represented through artefacts. But the layout of the exhibition on the plan of a rich villa pushed the non-rich into the background more than was necessary. The exhibition presented itself as concerning ‘everyday life’, yet in fact concerned ‘rich life’ – and not ‘the rich life of high politics’ but ‘the rich life of interior design, sex life, and stuffed-dormouse-eating’. The Romans emerged as more cuddly – more Etruscan – than they were. These were not fig-eaters with harmlessly playful sex-lives suddenly overwhelmed by a pyroclastic surge. They included exploited slaves, exploited prostitutes, and some of the most privileged, sophisticated citizens of the world’s most populous and powerful empire.