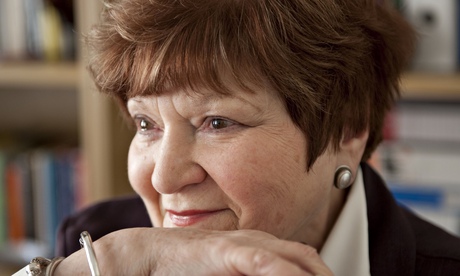 Helen Bamber died two days ago. She was a founder member of Amnesty International, co-founder of The Medical Foundation for Victims of Torture (now called Freedom from Torture), and founder of the Helen Bamber Foundation for victims of such abuse – as trafficking and gender-related violence – as fell outside the remits of her other organisations.

Between the ages of twenty-two, when she helped survivors at Bergen-Belson Concentration Camp, and eighty-eight, she worked for ‘human rights’, as her period has termed them.

I saw her once. In the summer of 2008, at the time I was finishing my PhD, she came to give a talk in the Middle Common Room of Newnham College, Cambridge.

As one might expect of such a place, the room was feminine and commodious. The armchairs were winged and chintzy. Helen stood behind one of them to speak.

Her talk was of bodies: of terrible things which had been done to them at close range. She gave examples from across her career which I do not remember, doubtless in part because I didn’t want to.

All I remember distinctly of what she said was that torture survivors in the UK tended to take up too much of doctors’ time. When doctors asked them to describe what had happened to them, they couldn’t immediately answer. And doctors, simply, ‘didn’t have the time to listen to the silences’. For this reason Bamber founded The Medical Foundation, of which the therapists would listen for as long as it took – until the silences themselves expired.

Her speech was so much of bodies that I couldn’t help but observe her own. It was comfortable and rounded. Her face was carefully made up. Her hair was coloured, and perfectly curled.

It was striking, and perhaps it was necessary – that someone who spent her life witnessing to horrors should be so careful with herself, and should present herself so whole and undamaged to those with whom she spoke.

As she spoke she stroked one of the cushions on the armchair with her careful, cared-for hands.

She exercised infinite care towards that cushion, as though she were trying to heal it.

And with it all the world.