Posted on August 8, 2013 by Catherine Posted in Plays 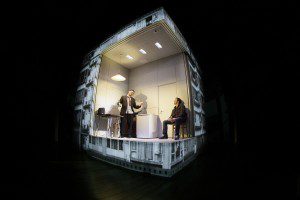 The title is taken from Niall Ferguson’s 2010 neologism denoting the symbiotic relationship between the United States and China. This ambitious play mainly meets its ambitions, which are many, and can be summarised as follows: to speculate what might have motivated the man who stood in front of the line of tanks on Tianenmen Square in June 1989 and what might have happened to him since (of both nothing is in fact known, at least by the wider world); to speculate how the photographer’s life might have been affected by having photographed him; to acknowledge the financial dependence of America on China; to lambast the Chinese Communist Party for brutality and corruption over the period from 1989 to the present; to present the American government in the same period with relative leniancy (the War on Terror is not mentioned); to assert that Chinese people are just as much individuals as Americans; to wryly observe the position of an Englishwoman in New York; to imagine the position of a Western company employee who protests against capitalism; to comment on the contemporary state of print and photo journalism in relation to foreign (including Chinese) ownership, smart phones, and the internet; to present a realistic contemporary love affair; to affirm the value of having children; to point out how uncertain the world into which children are born; to force you to consider unobvious perspectives on situations; and to leave you moved by heroism.

This play took six years to write, and you can see why. It would have required a vast amount of research, especially for a non-Chinese playwright, to present a credible picture of contemporary China, and of the lasting impact on individuals of the events of twenty-four years ago. It is also artistically ambitious; there are many memorable speeches, and at least three highly witty characters. The cast is huge – about twenty strong – as though acknowledging the size of the topics and countries grasped. The acting is excellent, as is the set (transferred directly from the Almeida Theatre where it ran before) – a revolving cube with corners cut out, and photographs of New York and Beijing tenemants projected on the outer walls.

Yet this is a play aching to be a film. There are thirty-nine scenes, moved between as though in jump cuts. Despite the crystalline dialogue and ‘dramatic’ construction (there are several plot twists which you should do your best to avoid before seeing it; fortunately most reviews on the internet don’t contain plot spoilers), this is a play which would gain far more than it lost by becoming a film, as I hope it one day does. New York and Beijing, with their different modes and degrees of grittiness and ‘fog’ (as the Chinese policeman insists on calling Beijing’s smog), should be presented with maximum reality – even though it would at the moment be impossible to film this in China; perhaps Seoul? There should be close-ups on suffering or laughing faces. And we – by stepping into the realistic world of Chimerica, rather than Chimerica being a highly-polished microcosm within a London theatre – would gain a still greater sense of the importance of the play’s themes.

I hope to see this a few years hence in a cinema, by which time Kirkwood will have to had update the script to reflect whatever has changed in the American and Chinese economies, in Sino-American relations, and in the memory of the events of 1989, over what is highly likely to be an eventful interim.