Posted on February 26, 2019 by Catherine Posted in Books 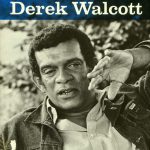 Bernard Richards – Emeritus Fellow of Brasenose College, Oxford, who taught English at the College between 1972 and 1996 – interviewed St Lucian poet Derek Walcott in 1992. This interview reveals – more strongly than anything else I have read about or by Walcott – the strength of Walcott’s religious sense. It is reproduced on this blog by Bernard Richards’ kind permission.