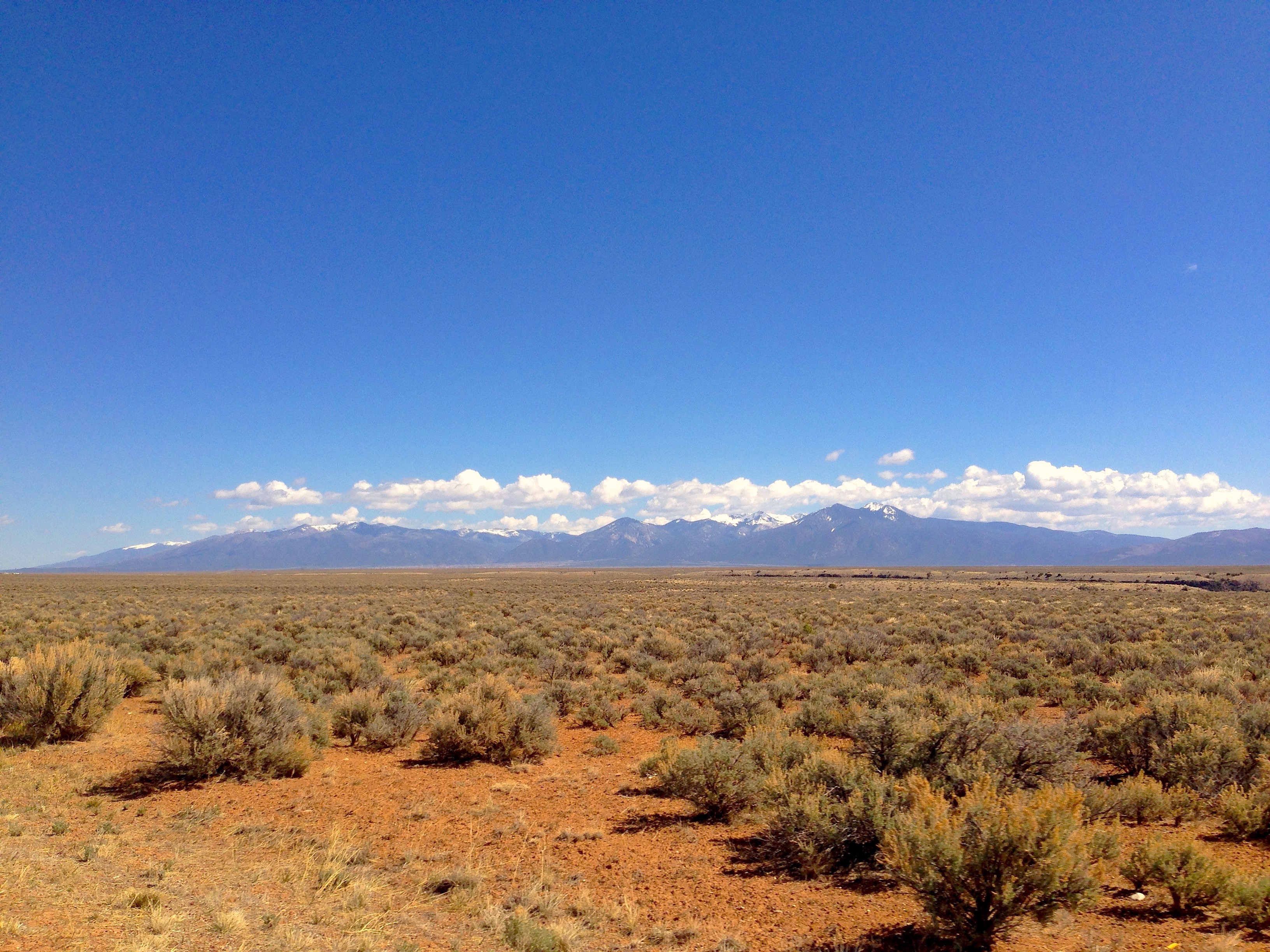 All photos are by Trevor Norris of the Taos area

Thirty-two people attended, including (from outside the UK) Justin Lapoint from North Carolina, John Worthen from Germany, Shirley Bricout from Brittany, Carrie Rohman from Pennsylvania, Julianne Newmark from Albuquerque, Liza Belozarova from Moscow and Stefania Michelucci from Italy.

St Mawr, ‘New Mexico’ and ‘Indians and Entertainment’, ‘Reflections on the Death of a Porcupine’, Study of Thomas Hardy, and Apocalypse.

Trevor started his talk by sharing that his interest in Lawrence centred in what he called the latter’s ‘eco-attunement’, in the context of the current ecological emergency. He was involved in the April and October 2020 uprisings of Extinction Rebellion (henceforth XR) and, through XR’s theories and practices, became more sharply aware of the need for an ‘emotional ecology’, and emotional regeneration altogether. An unhealthy emotional ecology has been created by political moralism, as reflected also in the viciousness of social media tactics. By contrast ecological activism must avoid moralism, accusations, quietism, and respectability politics, and should instead contribute to that emotional flourishing which is also an ecological imperative, as Lawrence understood:

‘No man, or creature, or race can have vivid vitality unless it be moving towards a blossoming: and the most powerful is that which moves towards the as-yet-unknown blossom. Blossoming means the establishing of a pure, new relationship with all the cosmos. This is the state of heaven. And it is the state of a flower, a cobra, a jenny-wren in spring, a man when he knows himself royal and crowned with the sun, with his feet gripping the core of the earth.’ (Reflections on the Death of a Porcupine, CUP, pp. 360-1)

A longer backstory on Trevor’s relationship to Lawrence is that he was born in Nottingham, where he was taught Lawrence much, but badly. His teachers ignored Lawrence’s cosmological and global journeys – his metaphysics and his works set outside of England – in favour of what they presented as his Midlands domestic realism. Trevor then spent his first ten years of academia in the field of French, before returning to English principally through St Mawr as read in the light of Heidegger and Heraklitus. Lawrence had learned of the latter through Bertrand Russell, who had encouraged him to read Burnet’s Early Greek Philosophy. Trevor became aware of how important what Heraklitus calls ‘polemos’ – war, flux, strife – is to Lawrence (a previous meeting of the London Group has discussed him in relation to ‘rage’) – and how much Lawrence rejected the idea of a Platonic ideal world in contrast to the actual, physical one.

Finally, Trevor had felt warmly welcomed into the world of Lawrencians, first at the 2011 International Conference in Sydney, and then in 2013, when Julianne Newmark facilitated his visit to Lawrence’s ranch in Taos. 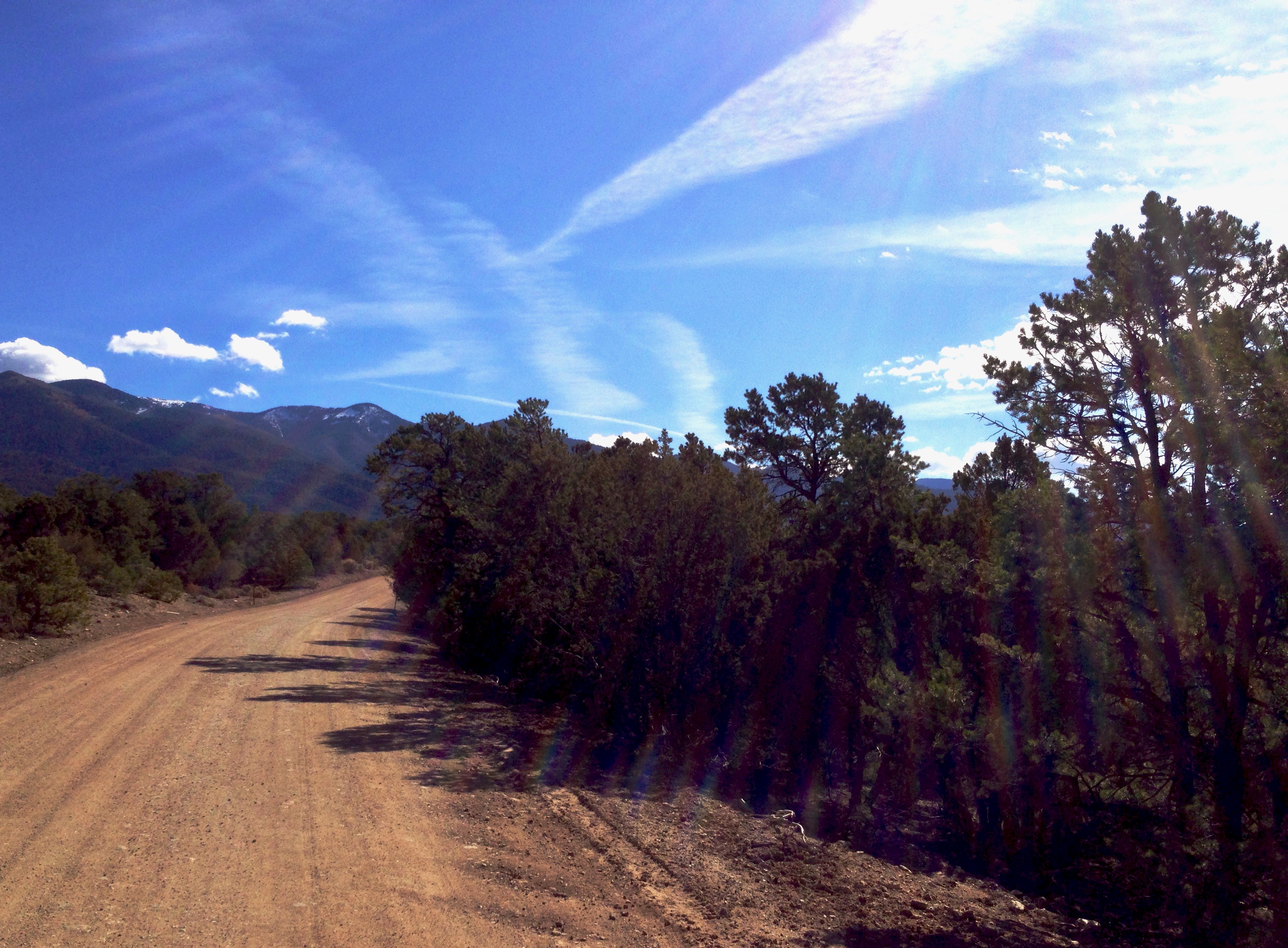 Trevor next gave a biographical introduction to St Mawr. In October 1921 Mabel Dodge Sterne invited Lawrence and Frieda to Taos, where she was the principal instigator of the artists’ colony (and gave certain of her own characteristics to both Lou Witte and her mother Rachel). The Lawrences spent three periods in Taos between 1922 and 1925, acquiring their ranch twenty miles North-West of Taos in 1923.

During this time Lawrence reached a new relationship with nature, as he articulated in St Mawr amongst works: ‘I think New Mexico was the greatest experience from the outside world that I have ever had.’ He rejected technologies of control over nature, and ideas of property, ownership and enslavement. In the novella Lou Witte, her mother and the groom Phoenix escape with the stallion St Mawr in order to avoid him being gelded, in what Trevor considered to be in part an insurrection against white supremacy. Lou is oppressed by the sense that everywhere in England is humanised – even the sky, which is coloured by coal dust and crossed by aeroplanes. Throughout the novella the sense of hearing is the foundational sense of ecological attunement – a kind of touching and being touched. Trees are presented as watching and listening with their leaves.

In this perception Lawrence anticipated by many decades the thought of the eco-philosopher Timothy Morton, in whose Humankind he suggests that all our senses are forms of touching, and forms of care. He also anticipated the researches of Abe Davis and Michael Rubinstein at MIT, who have discovered what they call the ‘visual microphone’ with which plants detect sound; from their vibrations, that sound can be reconstructed. All nature, then, is listening.

Georgia o Keefe painted ‘The Lawrence Tree’ at Taos. Sitting under that tree, Trevor explained, one is in an attitude of surrender to it – in a state of attuned, immersive being. 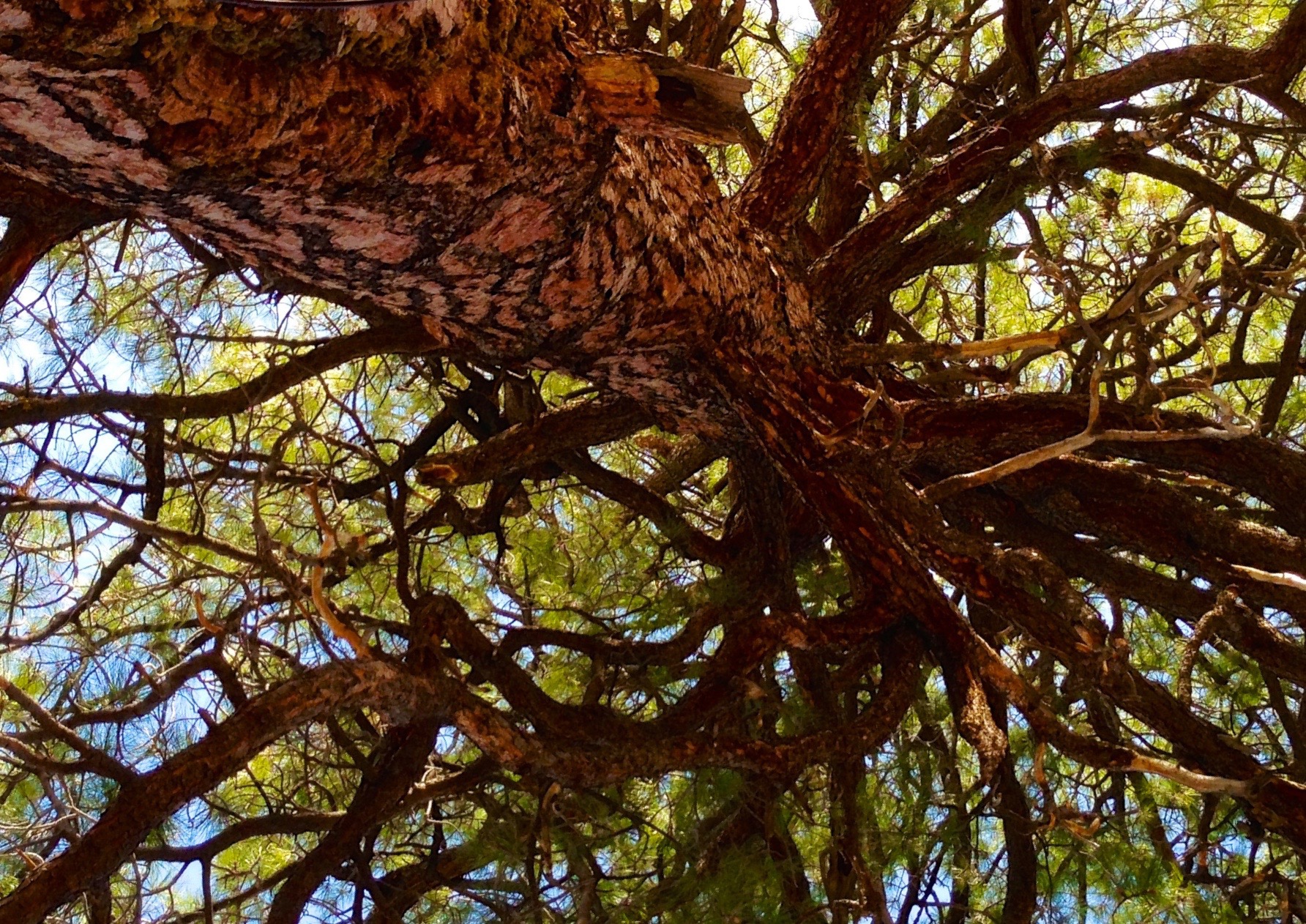 Meanwhile the ranch buildings are made of ponderosa pines. 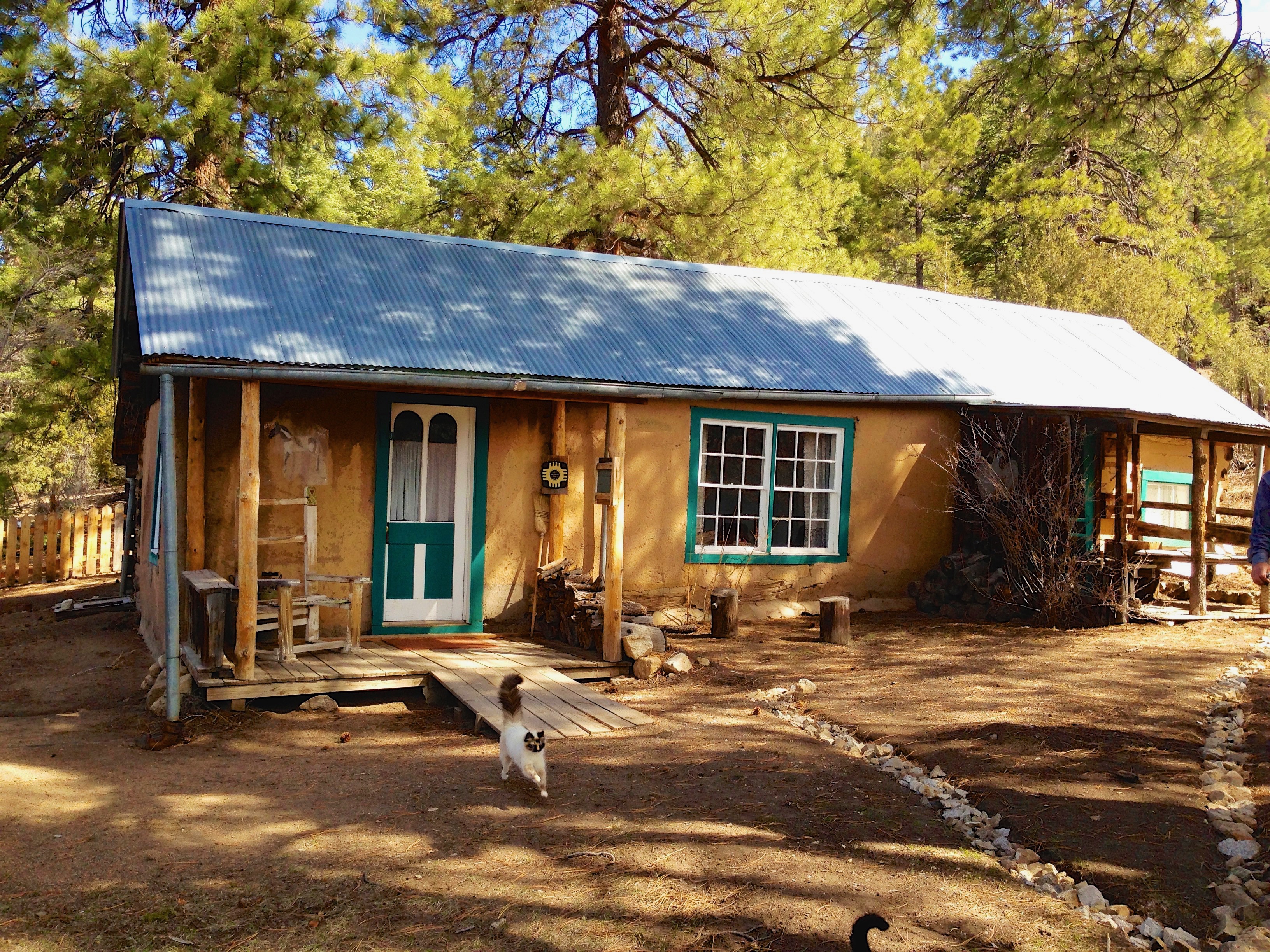 Discussion started with consideration of the passage from St Mawr in which Lou has ‘a vision, a vision of evil’. James Morgan referred to That Hideous Strength by C. S. Lewis, which describes a physical force of evil that tries to overtake the earth. Kathleen Vella noted that Lawrence had an idea of evil welling up from the core of Asia, and that the contemporary notion of the ‘Wuhan virus’ echoed this. But Trevor asserted that Lawrence was distanced from Lou’s sense of evil, which exists within a conception of the world that is theistic. Indeed, the concept of evil is itself part of the problem, because of its moralism. Trevor thought that one should be able to get beyond good and evil into another form of relatedness, and that the understanding of the world in terms of good and evil is part of the same cosmology as the desire for domination and mastery over nature: a world view simultaneously materialistic and idealising, capitalist and spiritual. Lara Feigel suggested that Lawrence was in fact most inclined to think in terms of both evil and apocalypse around the time of the First World War, for War-related reasons.

Adam Parkes said that the concepts of trees listening, and of humans being attuned to trees, reminded him of an XR activist whom he had recently met up – and chained to – a tree on Wormwood Scrubs as part of a protest against HS2. Trevor responded by arguing that Lawrence was ahead of his time not only in his predictions of human-made environmental catastrophe, but in his post-Romantic understanding of what nature was and how humans should relate to it. To Lawrence, in contrast to many of the Romantics, the experience of nature was not necessarily relaxing or restorative. Since nature involves dynamism and conflict, attunement to it must have those elements too. In ‘Indians and Entertainment’ he presents nature as as challenging as it is beautiful, and the Indians as thoroughly immersed in it. There is no idea of God because all is godly; there is ‘shimmering’ (a concept also important to Carrie Rohman’s work) in every leaf.

‘Susceptibility is very good news for ecological ethics and politics. I can be touched. Thinking itself is touching and being touched, not a guarantee of full metaphysical presence, but a disorienting flicker that haunts me or pleasures me or hurts me, and so on […] Perhaps ecological philosophy needs to generate a whole new language that inclines more toward touch, toward the haptic […] It’s not that seeing is reducible to touching, as if touching were more constantly present […] it’s that seeing, like hearing, is a part of touching […] The touch is lowly, susceptible, risky, humble—it subscends being able to see around and above and beyond a thing […] It is nearer, more intimate, quite the opposite of “more encompassing and less intimate.”’

‘It’s interesting that we think sheer survival (hence hunger) is more “real” than a quality of existing, such as being happy. Just surviving, hunger, are supposedly “real” conditions, by which we mean nothing to do with being human in particular. Ecological catastrophe has been wrought in the name of this survival, sheer existence without heed to any quality of existence. This default utilitarianism has been very harmful to us, let alone to other life-forms.’

‘Agrilogistics has been effective since the beginning: you turn your farmland into a desert, and you move west […] we are going to need to find a different concept of whatever a life-form is. We are going to have to relax the life–non-life boundary. The default utilitarianism encoded into Mesopotamian space contains an implicit axiom: more existing is always better than any quality of existing.’

James Morgan stressed that the trouble was that we now live in a world where intuition is dismissed as infantile, and even mental health is rigidly quantified. Trevor agreed, and adduced Meghan’s remarks about the dismissive response of the Palace when she claimed mental distress. Moreover now, as a result of the virus, we are about to face an epidemic of mental ill health.

Jonathan Long asked, in that case, what was to be done? How could we change things?

Trevor said that the solution was to give examples – and to oneself constitute an example – of flourishing, in order to induce others to join one in a new relationship to the universe.

Morton stresses that such a condition of flourishing is the opposite of ascetic privation:

‘The pathway toward this solidarity is about increasing and enhancing and differentiating more and more pleasures. This is quite different from the ecological task many of us assume is the right one: creating a restricted economy. Doing that would be a disastrous repetition of the oil economy, where concepts such as efficiency and sustainability (both perfectly anthropocentrically, not to mention neoliberally, scaled) have wreaked havoc on happiness, whether one is human or not. Talk of efficiency and sustainability are simply artifacts of the relentless use of fossil fuels. In a solar economy, you could have a disco in every single room of your house and way fewer lifeforms would suffer.’