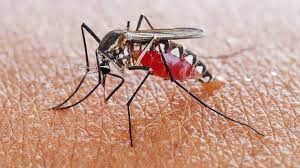 18 people attended, including, outside of England, Justin LaPoint from North Carolina, Maria Trejling from Stockholm, Shirley Bricout from Brittany, Kathleen Vella from Malta, and Simonetta de Filippis from Italy.

Rachel Murray is the author of The Modernist Exoskeleton: Insects, War, Literary Form (Edinburgh University Press, 2020), and her talk took as its starting point the chapter of this book that concerns D. H. Lawrence.

‘Lawrence’s poem ‘The Mosquito’ describes itself as a ‘paean of derision’ to the creature caught sucking the speaker’s blood. Cursing the mosquito’s ‘filthy magic’, the speaker squashes it in a fit of rage, leaving behind an ‘infinitesimal faint smear’. Yet while the poem expresses a powerful sense of aversion towards non-human life – pesky insects in particular – it is striking how in provoking such a negative reaction, this tiny creature generates much of the strength of feeling that fuels the speaker’s creative response. While gorging on his blood, it feeds his imaginative processes. I want to reflect on the significance of insects to Lawrence’s thinking about the importance of bodily discomfort in generating new forms of self-knowledge.’

Rachel started by noting that Lawrence’s insect imagery is for the most part negative: there is the notorious letter to Garnett in 1915 which likens Cambridge’s homosexuals to beetles; Kate Leslie (protagonist of The Plumed Serpent) has a phobia of the masses of Mexico City who resemble a swarm of locusts; in Australia Richard Lovat Somers (protagonist of Kangaroo) feels caught ‘like a fly on fly paper’, and has at times a horror of the formic masses; such associations appear particularly in Lawrence’s inter-war fiction. As other sessions of this group have discussed, insectile-human analogies were frequently being made during Lawrence’s lifetime, as insects were intensively studied in the light of Darwinism – both original and social. Yet such analogies were far from always negative, and this is true of Lawrence too. Ultimately Somers is ambivalent about Australia and its insectile masses, alternatively involving himself with, and retreating from, them in what Rachel described as an ‘antsy’ agitated movement, which the reader perforce mimics in reading the story. Moreover the novel’s vocabulary can be challenging and difficult to pronounce, making the form of the novel itself ‘itchy’.

However, this evening Rachel wished instead to consider Lawrence’s response to insects per se. This wish was in part compelled by the current circumstance of environmental crisis, in which certain insects are at the forefront of biodiversity loss, yet in which others – such as mosquitos, cockroaches and bedbugs – have thrived in the age of the anthropocene. Bedbugs, to take an example, were very common by the late nineteenth-century. DDT then near-eradicated them in certain parts of the world until the late 1990s, when international travel, the banning of DDT, and insecticide-resistant bedbugs led to their resurgence. It has since become apparent that humans cannot exterminate their way out of the discomfort that insects bring with them, and that the attempt to do so comes back to bite us (as with the emergence of autoimmune conditions; in the 1980s scientists discovered that hookworm being absent from humans caused inflammatory diseases). Lawrence had a sense of this, and thought that we should not try to seal ourselves off, literally and metaphorically, from insects. Rather, we needed to be ‘quick’ in relation to them, as the persona is in the poem ‘Mosquito’. Here a grudging respect emerges, as the tiny creature fuels creativity and energy in Lawrence as the two literally commingle. Not irrelevantly, this poem concerns an insect species of which individual members often experienced by humans as possessing a degree of isolation and independence.

Maria Trejling pointed out that animality is often very positive for Lawrence ­– to the point of romanticisation – but that insects are a partial exception; she wondered whether Lawrence here was simply influenced by cultural norms likening insects to humans and vice versa, meaning that insects suffered in Lawrence’s estimation by virtue of their human-likeness rather than their animality. Rachel responded that, still more simply, insects were much more pervasive in homes in Lawrence’s time than now, and that – as lived experience – they could often be irritating, not to mention dangerous. Edward Chaney pointed out that many people in Europe still died of malaria at the time, and that it had therefore been one of Mussolini’s projects to drain the swamps. Nahla Torbey said that Lawrence wrote the poem in Syracuse, where malaria existed – but that the poem nonetheless contained no sense of danger. Rachel responded that the connection between mosquitoes and malaria was only made at the turn of the twentieth century, and that Lawrence (who was to contract malaria later himself, in Mexico) might not have known of the connection. Edward Chaney noted that Verga, whom Lawrence translated, discussed malaria, but seemed not to make the connection with mosquitoes; as the disease’s name suggests, it was considered to derive from bad air.

Similarly, Catherine Brown wondered whether Lawrence – whose mosquito in his poem is male – knew that it was the females that bite (Nahla added that the insect’s name in Arabic is a female noun). Edward thought that Lawrence was also ignorant of this fact, and Jane Costin thought that, had he known, he might have made a play on his own common trope of the devouring mother. Bob Haywood, however, thought that in Lawrence’s time it was widely known that it was the female that sucked blood in order to create her eggs, and that Lawrence was simply being chivalrous.

Nahla initiated a discussion of the affect of the poem. Jane Nichols pointed to the aggrandising images of ‘Mosquito’, such as ‘Winged Victory’. Kathleen Vella thought that the ‘winged’, along with the ‘bugle’, might have contemporary military resonances, whilst Maria pointed out that the word ‘wing’ imitated the sound of the mosquito. Catherine Brown noted the poem’s form of unanswered questions moving towards an exclamation mark. She thought that the aggrandizing metaphors were not mock-heroic but seriously intended – notwithstanding the humour of the poem – and that there is plangency in the fact that the moment of death is not described (Maria Trejling pointed out that this is the only of Lawrence’s animal poems in which the animal dies), as well as irony in the fact that the mosquito holds no fear from him. As the current pandemic has demonstrated, it is from the tiniest of life forms, the nearly-nothings, that humans have the most to fear.